Vice President of India praises Christian Community for its Dedication 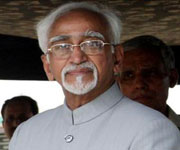 Vice President of India, His Excellency Hamid Ansari lauded the Christian community's contribution to the nation. He said Christ's message of peace and compassion are perennial values for all mankind. He was speaking as the Chief Guest of the Christmas celebrations organized by the Catholic Bishops' Conference of India (CBCI) at its headquarters here, December 18. The newly elevated Cardinal Cleemis Mar Baselios Catholicos, Head of the Syro Malankara Church and Vice President of the CBCI was felicitated during the event. Several Union Ministers, members of parliament and persons from religious and civil leadership were present.


Hamid Ansari in his message recalled the perennial values of Jesus Christ, whom Gandhiji described as the "greatest teacher of all times". Christ's teachings and message represent the fundamental human values of unity, peace, and respect for everyone, compassion for the poor and selfless sacrifice, he noted. He wished all the citizens of the country, particularly the Christian community the peace of Christ's birth. He recited a poemby Longfellow which recalls Christ's birth at Bethlehem and the "peace on earth and good will to everyone" he offers. The Vice President also congratulated the Cardinal Cleemis Mar Baselios Catholicos, Head of the Syro Malankara Church and the youngest cardinal in the Catholic Church for his elevation as Cardinal.


Cardinal Oswald Gracias, CBCI's President congratulated the newly elevated Cardinal Cleemis and described his elevation to the high office in the Church by Pope Benedict XVIas recognition of his personal qualities as well of the Syro Malankara Church itself. He recalled the contribution of the former heads of the Syro Malankara Church who made distinct contribution to the witness of unity and service in the church and the country. Cardinal Oswald noted that Cardinal Cleemis is the youngest cardinal in the universal Church.


In his Christmas message, Cardinal Oswald Gracias said inspite of many situations of conflict and violence, poverty and economic crisis, the message of Christmas and the peace of Christ should make us focus on peace, joy and hope. Christ's birthday is reminder of how much God loves us, he said.


Archbishop Salvatore Pennachio, Apostolic Nunico to India in his Christmas message said Christmas must help us rediscover the gift of faith. Quoting Pope Benedict's World Peace Day Message, he said, everyone must cultivate a passion for good. Cardinal Cleemis while thanking everyone for their words of appreciation and congratulation said, he and said all of us are proud to be citizens of a great nation. He prayed for peace amity in the country and among all the people. He said the Church is committed to the call of Lord Jesus Christ to sever all the people of the country.