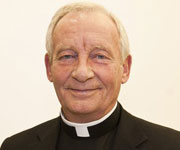 The Catholic bishops of England and Wales have reacted strongly to a bill published by the British Government on Friday regarding legalization of marriage for same-sex couples. Describing the proposed move as "deeply regrettable", the Church leaders say there is no electoral mandate for the Bill and they describe last year's consultation process on the issue as "shambolic". Members of Parliament are expected to have a first vote on the legislation next month, but the bishops say they'll be vigorously opposing the Bill, "alongside many people of all faiths and none."


Archbishop Peter Smith, Vice President of the Catholic Bishops' Conference of England and Wales stated that it is deeply regrettable but not unexpected that the Government has chosen to proceed with introducing a Bill to change the definition of marriage. Alongside many people of all faiths and none we will be vigorously opposing the Bill.


Marriage has an identity distinct from any other relationship, no matter how much love or commitment may be involved. Marriage is and always has been the union of one man and one woman, for love and mutual support, open to procreation. Marriage has, over the centuries, been the enduring public recognition of this commitment and it has rightly been recognised as unique and worthy of legal protection. It furthers the common good of society because it promotes a unique relationship which benefits children. The fundamental problem with the Marriage (Same Sex Couples) Bill is that it will radically alter the meaning of marriage for everyone and therefore undermine the common good. This is what is at stake. The Bill also raises very serious questions especially about religious freedom and freedom of expression, the effect on teaching in schools, and the work of chaplains and others with religious convictions involved in the delivery of public services.


There is no electoral mandate for this Bill and last year's consultation process was shambolic. We welcome the promise of a free vote for MPs, and hope the Bill will be defeated. We will be producing a briefing on the Bill once we have studied it in detail with our legal advisers. Source Vatican Today