Catholic in Bombay starts campaign for safety of women 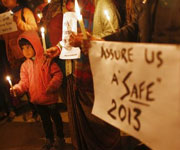 The Bombay Archdiocese would later this month start a campaign to create awareness about violence against women in the country. Initiated by the women commission of the archdiocese, the campaign is named "37 Million Diyas (lamps) Campaign" which would start on January 27. The number "37 Million" is the gender gap between males and females in the country according to the 2011 census.


The campaign would focus initially on the gender gap to get people to reflect on the larger picture of violence against women. This campaign will begin with observing an hour of solidarity between 7 p.m. and 8 p.m. in all parishes on the day. Cardinal Oswald Gracias has sent out a circular requesting parish priests in the diocese to observe this day as suggested by the women commission. He pointed out that the marginalization of God from people's lives has resulted in the weakening of our spiritual moorings causing a loss of respect of the human person and ethical values.


The campaign aims to raise awareness about female feticide, female infanticide, dowry deaths, sexual assault and high mortality rates of girls under five due to neglect. It would also focus on the low status of women in India which is the root cause of this female feticide. The commission has drawn up a list of suggestions for parishes to observe the hour of solidarity.


The parishes can conduct various programs, including candle-light processions, public gatherings, street plays, power point presentations, formation of human chains to express solidarity with women. The commission suggests that if such public expressions are not possible, a holy hour service or an inter-faith prayer service during that time may be arranged.


"We need to go beyond the law, beyond self-interest and beyond self-preservation to always seek what is good for the wellbeing of others as indeed of the whole of society," the Cardinal said. He said that the process of changing mind-sets and attitudes derogatory towards women should begin with the family as it is in the family that the foundation of our and approach toward women is formed. The women commission, in collaboration with other bodies in the archdiocese, is meeting on Jan. 25 to draw up a long term plan that aims to conduct awareness programs about safety of women.