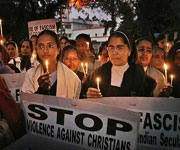 Christians in Maharashtra have accused local Hindu nationalists of leading a campaign denying them basic necessities including water and firewood. The Christian community, including mostly tribal people, in the small town of Manor has been told not to draw water from wells and shopkeepers have refused to sell them firewood to cook food. "A social and economic boycott of Christians is in force in the town by Hindutva [right-wing Hindu] forces," said Joseph Dias, a campaigner for Christians in the area. "Political and communal groups are involved."


The village council called a recent meeting to impose economic sanctions and restrictions on worship against all Christians in the area, said Dias, measures which follow an attack by Hindus on a house church on December 30. A mob of as many as 500 Hinduvta fundamentalists barged into the church and asked worshippers to stop the Sunday service, beating members of the congregation – including women and children – desecrating copies of the Bible and damaging musical instruments, said witnesses.


Brother Ravindra Jadhav, who preaches in the village, said tribals there are no longer able to worship freely in the church and must instead travel 20kms to do so. Hinduvta followers have warned them that there would be further violence if a church service is held in Palghar again on Sunday, said Jadhav.


Dias, president of the Catholic Secular Forum, said he suspects the hardline stance taken by right-wing Hindus in the village is a precursor to Maharashtra state elections next year. Lower level Hindutva – a nationalist philosophy of loosely affiliated groups including the opposition Bharatiya Janata Party (BJP) – are reported to have said that they have received orders from seniors to prevent Christian practices in the state. "The fundamentalists want to consolidate the Hindutva votes," said Dias. "That might be the motive behind this move against Christians."


In early December, right-wing Hindus reportedly attacked Christians attending a Sunday service in Malvan, a small beachside town in Maharashtra just north of Goa. This followed a similar attack in the same town in late October. In Palghar, Dias said police had ignored Christian pleas for help and in some cases had demanded 2,000 rupees (US$36.50) per officer to provide protection. "We have directly approached the state home minister, R R Patil, and we're expecting some action against the Hinduvta forces," said Dias. Source UCAN INDIA