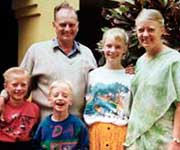 More than 600 people, including Christian leaders from across India, celebrated Martyrs Day, which is dedicated to the memory of Rev.Graham Staines, an Australian missionary killed with two of his children on January 23, 1999. A meeting was organized at the Campus Crusade for Christ in Bangalore, Karnataka by the Global Council of Indian Christians (GCIC). During the meeting, GCIC President Dr.Sajan K George presented figures related to incidents of anti-Christian persecution in 2012.


Overnight on 22-23 January 1999, Hindu extremists set fire to the station wagon in which Rev.Graham Staines and his sons Philip and Timothy were asleep in the village of Manoharpur, Keonjhar District of Orissa. In 2006, the reverend's widow Gladys and her surviving daughter, Esther, went back to live in Orissa. She forgave Dara Singh, the man responsible for the murders, "because there is no bitterness in forgiving, only hope".


Babu K. Verghese, author of "Burnt Alive", a book dedicated to the life and work of Rev.Graham Staines, was present at the meeting. The aim of my book, Verghese said, "was to spread a message of forgiveness, first shown by Mrs.Gladys Staines and her daughter".


In his address, Sajan George said he was worried by the growing intolerance shown by fundamentalists, especially Hindu nationalists. He also spoke about the so-called anti-conversions laws, which bar people from changing religion when "it is done through force, coercion or fraud", but are used de facto to persecute Christians. "Although the right to religious conversion is guaranteed by our constitution, seven Indian states have laws known as Freedom of Religion Acts" that prevent it, he said.