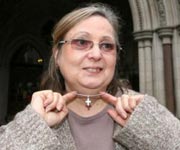 The European Court of Human Rights today ruled that British Airways (BA) discriminated against a devoutly Christian airline employee by making her remove a crucifix at work. British Airways check-in clerk Nadia Eweida sparked a national debate in Britain over religion in public life. Eweida was sent home in November 2006 for refusing to comply with rules banning employees from wearing visible religious symbols. She claimed she was a victim of religious discrimination, seeking damages and compensation for lost wages. British courts backed BA but Eweida went to the European Court of Human Rights.


The Strasbourg, France-based court ruled that the airline's policy "amounted to an interference with her right to manifest her religion." But the court ruled against Shirley Chaplin, a nurse who was told to remove a crucifix necklace at work. The judges said Chaplin's employer banned necklaces on health and safety grounds and so asking her to remove the symbol was not excessive.


The judges also struck down claims by a local authority registrar who said her Christian faith prevented her from overseeing same-sex civil partnerships and a marriage counselor who refused to offer sex therapy to gay couples. In both cases, the court said employers had had to strike a balance between claimants' rights to manifest their religious beliefs and the rights of others not to suffer discrimination. The court's rulings are binding on the 47 member-states of the Council of Europe, the continent's human rights watchdog. Source Times of India