‘Justice should not be secondary to peace’ says Navanethem Pillay 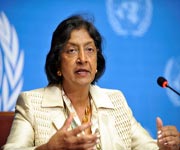 Justice should not be secondary to peace and both should go together, according to Dr.Navanethem Pillay, United Nations High Commissioner for Human Rights. She made her comments in an encounter with the Rev.Dr Olav Fykse Tveit, General Secretary of World Council of Churches (WCC). They met on 23 January at the UN Human High Commissioner's Office in Geneva, Switzerland. In the meeting Dr.Tveit shared information concerning the WCC's work in promoting justice and peace, also a theme of the upcoming assembly of the WCC in Busan, Republic of Korea later this year.


Dr.Pillay has heard concerns about religious freedom during a meeting with the head of the World Council of Churches, acknowledged the role of the WCC and noted that the drafting of the Universal Declaration of Human Rights following the Second World War was influenced by Christian values and principles. She called the WCC a valued partner of the UN in promoting the universality of human rights and its practical applications.


Dr.Tveit spoke with Dr.Pillay about the WCC's ongoing commitment to promote and protect human rights. "The issue of freedom of religion and rights of religious minorities has been a prime concern of the WCC. On behalf of our member churches, we speak for the rights of all religions irrespective of their affiliations," said Dr.Tveit during the meeting.


Several examples of the WCC's recent work in the area of religious freedom were discussed at the meeting including advocacy on the misuse of the blasphemy law in Pakistan and the response to increasing religious intolerance in Nigeria. "While engaged in advocacy on religious freedom and the rights of all human beings, the WCC also uses an interfaith framework for addressing the human rights concerns rather than limiting them to the interests of Christians alone," said Dr.Tveit.


Dr.Pillay recollected that the UN was in partnership with the WCC in the area of human rights even before the Office of the High Commissioner for Human Rights was established. The WCC continues to engage with the UN Human Rights Council and its various mechanisms defending human rights in many parts of the world.


The WCC General Secretary was accompanied by the WCC's Associate General Secretary, Dr.Isabel Apawo Phiri, Director of the WCC Commission of the Churches on International Affairs (CCIA), Dr.Mathews George Chunakara and the WCC's Programme Executive for Human Rights and Global Advocacy, Christina Papazoglou.