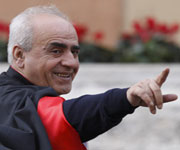 Food, medicine, electricity and fuel are increasingly scarce in Jazira, the river plain area of Mesopotamia which encompasses northwestern Iraq and northeastern Syria. With the influx of Syrians fleeing the conflict in their country, Jazira's population of 1 and a half million has swelled to some 2 million and Church and humanitarian officials are raising the alarm, saying not enough is being done to help them.


Syria's Catholic Archbishop Jacques Behnan Hindo of Hassake-Nisibis has appealed to the United Nations' Food and Agriculture Organization and to Iraqi Prime Minister Nuri al-Maliki for immediate humanitarian aid to the thousands of Syrian refugees in the Jazira region. Most have flooded the area from Homs, Damascus and Aleppo and Deir- Ez-Zor. Fides News Agency reports that Archbishop Hindo says the situation is worsening and "could soon become catastrophic."


The Archbishop says essential goods and fuel are becoming a rarity because of looting and the interruption of supply routes. Syria's Upper Mesopotamia is connected to Mosul, Iraq by one international road. The lack of fuel is preventing people from heating their homes and is stopping farmers from planting crops at the start of the season in this rich agricultural zone. Baby formula and medicines, particularly antibiotics are disappearing.


In a letter sent to Prime Minister Nuri al-Maliki, Fides reports that Archbishop Hindo made an urgent appeal for 600 fuel tanks, gasoline and several tons of flour.