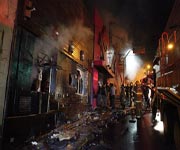 The General Secretary of World Council of Churches, Rev.Dr.Olav Fykse Tveit has conveyed "sincere condolence" to the people and churches of Brazil over the death of more than 230 students who were killed due to fire at a night club in Santa Maria, Brazil on January 27. In his message to the Brazilian President Dilma Rousseff, Rev.Tveit said, "Our prayers are with you as a nation mourning the deaths of those young Brazilians, particularly those supporting all the people affected, including the churches of different confessions, which are providing the necessary accompaniment to families affected by the tragedy."


While Rev.Tveit assured the Brazilian churches of prayers and solidarity of Christians at this tragedy. He also appreciated their efforts to comfort the families and friends of the victims. "We have been very moved by the compassionate ministry carried-out by several churches in the region, providing the necessary accompaniment to all families affected by the tragedy, which has been a genuine example of the gospel's mandate to 'weep with those who weep' (Rom. 12:15)," he said in his letter to the Brazilian churches.


The WCC General Secretary's letters were delivered to the Brazilian president and the churches by the National Council of Christian Churches of Brazil.