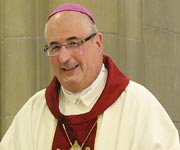 The Archbishop of Glasgow, Philip Tartaglia has been named temporary successor to Cardinal Keith O'Brien who resigned this week after the Observer reported allegations of inappropriate behaviour towards three priests and a former priest. Philip Tartaglia will govern the Roman Catholic Archdiocese of St Andrews and Edinburgh until a permanent successor is appointed. Pope Benedict XVI named him as Apolistic administrator after Cardinal O'Brien stepped down from the post on Monday.

Cardinal O'Brien, who had been Archbishop of St Andrews and Edinburgh since 1985, was created cardinal by Pope John Paul II in 2003. With Cardinal O'Brien's resignation from the post, the Archdiocese is known as a "vacant see" and remains so until the appointment of a new archbishop. The Apostolic administrator governs with the authority, obligations and rights of a diocesan bishop until then.


Cardinal O'Brien is now Archbishop Emeritus of St Andrews and Edinburgh and has no role in the governance of the diocese. Cardinal O'Brien, who was Britain's most senior Catholic cleric, said he will not travel to Rome for the conclave to elect the next pope to avoid becoming a focus of media attention. His decision has left Britain's Roman Catholics with no vote in the conclave.


Archbishop Tartaglia said: "These are painful and distressing times for the archdiocese. I also feel pained and distressed". "With the grace of God, I will do my very best to oversee and govern the archdiocese until the appointment of a new archbishop. I ask for your prayers," he added.


He tendered his resignation to the Vatican in November, citing age and "indifferent health". He was expected to step down next month when he turns 75, but his resignation has now taken effect. Cardinal O'Brien has denied the allegations and is taking legal advice.