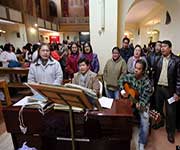 Four Christian missionaries were arrested in Benghazi, Libya on suspicion of printing books about Christianity and for distributing Biblical literature, an offence that could carry the death penalty. “The four were arrested on Tuesday at a publishing house where they were printing thousands of books that called for conversion to Christianity,” security official Hussein Bin Hmeid said. "Preaching is forbidden in Libya. We are a 100 per cent Muslim country and this kind of action affects our national security."


The private security firm, Preventative Security, which is affiliated to the Government, arrested an Egyptian, a South African, a Korean and a Swedish-US citizen. He said the four would be interrogated and then handed over to Libyan intelligence authorities. There is small Christian population in Libya, with tough restrictions on religious practice. Inter-marriage with Muslims is forbidden unless the Christian partner converts to Islam.


There are estimated to be around 300,000 Christians in the country, many of them immigrant workers from Europe and the rest of Africa, but churches in the country, of which there are five in Tripoli alone, have rarely been attacked or Christians targeted, unlike in Egypt or Tunisia.


However, many in the country are worried. A church bombing in December killed two people in the Mediterranean town of Dafniya. Last week, Dalmasso Bruno, caretaker of the Italian cemetery in the Libyan capital told: "Not a day goes by without tombs being vandalised. Human bones have been taken out of their tomb and scattered across the cemetery.” "The Libyan authorities came and took pictures. They promised to take measures but nothing has been done."


Father Dominique Rezeau of the Catholic church of Saint Francis near Central Tripoli, attended by congregants mainly from India, the Philippines and African nations told the news agency there church took no special security measures and worshippers could enter and move around freely.