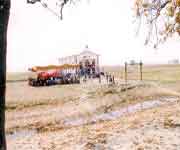 A mob of about 100 Hindu activities violently attacked a peaceful gathering of Christian believers on Friday, February 08, 2013 in Rajnandgaon village, about 70 kms from Raipur, capital of Chattisgarh State during the meeting. About 30 Christian believers were injured. The Rajnandgaon City Police has registered a case against the believers and the church.

The Indian Christian Mission (ICM) organized a three-day meeting from the 07th to 09th February under the leadership of Pastor Thomas Abraham at there. On Friday, February 08, around 250 Christian believers were in attendance when about 100 RSS, Bajrang Dal and VHP activists barged into the Church Hall with rods and sticks in hand and started abusing the people and accusing them of conversion


They started breaking the doors, windows and attacked all the bikes and cars parked outside. There was a big commotion as the people ran helter-skelter trying to move to safety. 30 believers were injured as their hands and legs were broken and a few suffered injuries to their head. One believer called the City Police Station in Rajnandgaon, 200 meters from the Rajnandgaon Railway Station. The police arrived at 3:15 p.m., took a report from several believers and took the injured to the Government Hospital in Rajnandgaon. Soon after the injured received medical attention, they were told by the police to leave the hospital before the mob came and attacked them there too. When the believers left the hospital all the records of them having been treated there were destroyed. In fact rather than registering a case against the Hindu radicals, the police registered a case against the church and believers who were attacked.


The believers and pastors of the area are planning to appeal to the Governor and other authorities reporting the incident and the treatment meted out to them by the local police during and after the ordeal.