Church of South India vows to get back its lost property 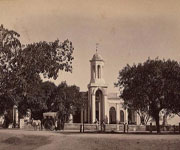 Senior members of a nineteenth century church, built for the British army, have vowed to get back its lost property. The St. John's Church in Hyderabad, which was built in 1813 on a 100-acre campus, now stands on a strip of land which is less than one fifth of its original size. The church has donated a substantial portion of land for road widening activities and setting up of a park. The Church of South India (CSI), which has the 200-year-old Anglican property, would showcase its history during its year-long bicentenary celebrations starting after the lent season in April.


The Anglican members of the congregation hope that the 'actual' Anglican history (the church had European chaplains till 1975) would be represented in the celebrations. Some of the historical portions of the church, like a strip where the military band used to play every Sunday is no longer with the CSI.


"That strip of land was given to the state government for road widening and also to construct a park," said Bhaskar Benny, a senior advocate, who has been fighting to get back various church properties in the state. The church has also lost some of its priceless heritage structures. For instance, the baptism font, a marble (single stone) structure which was set up in 1905, has lost its cover which was never restored.


The Christian Front, comprising members of different church missions, including those of the Anglican order, said that it was concerned about the property loss and would probe into it and find ways to get it back. The promoters of the Anglican order of worship said that their probe will also look at the loss of property of other Anglican churches, including St George's Church and Trinity Church and their attempt would be to get back the lost grandeur of religious institutions.


"The fact that the church lost its property to government ventures shows that the CSI Trust Association (which manages the property trust) should take more initiatives to hold on to this valuable property which in fact sets the ambience of worship," said Benny, who is also the Vice-Chairman of the Christian Front. He said that the church property should come under the endowment board so that such large-scale land alienation does not happen frequently.