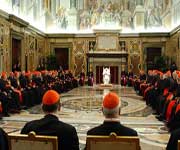 Five Cardinals from India will participate in the conclave at the Vatican in the 'Holy Week' beginning from March 24 and vote to elect the next Pope. Only 117 of the total of 206 Cardinals of the Universal Catholic Church will be eligible to vote in the conclave to elect the 266th successor of Saint Peter as they are below the age of 80 years, Deputy Secretary General and Spokesman of the Kerala Catholic Bishops' Council Fr Stephen Alathara said.


The maximum strength of the College of Cardinals, with the right to vote, was fixed as 120, he added. The head of the Universal Catholic Church is also known as Successor of St. Peter, The Supreme Pontiff of the Universal Church, Primate of Italy, the Archbishop and Metropolitan of the Roman Province, the Sovereign of the State of Vatican City and the Servant of Servants of God, Alathara said.