How do the New POPE elected in Papal election? 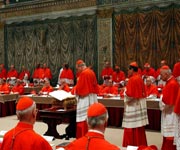 Papal Conclave is a meeting of the College of Cardinals gathered to elect new Bishop of Rome, also known as the Pope. The pope is considered by Roman Catholics to be the apostolic successor of Saint Peter and head of the Roman Catholic Church. It has been the procedure for choosing the pope for more than half of the time the church has been in existence and is the oldest on going method for choosing the leader of an institution.

Sistine Chapel of the Apostolic Palace


Since the Apostolic Age, the Bishop of Rome, like other bishops, was chosen by the consensus of the clergy and people of the diocese. The body of electors was more precisely defined when, in 1059, the College of Cardinals was designated the sole body of electors. Since then other details of the process have developed. In 1970, Pope Paul VI limited the electors only cardinals below the age of 80 are eligible to cast a vote in elections for a Pope. The current procedures were established by Pope John Paul II in his apostolic constitution Universi Dominici Gregis as amended by a motu proprio, is a document issued by the Pope Benedict XVI dated June 11, 2007. A two-thirds supermajority vote is required to elect the new pope.


Now, the Electoral College consists of 117 cardinals, even though there are 211 cardinals, there have to be 117 cardinals who are under the age of 80. These 117 not only cast their votes to elect a new pope, but each one of them can also contest for the post. The 117 cardinals huddle together in prayer ahead of the elections. Once the election process starts, they come out only after the new pope is elected from among them. This could take about five days. When the election process is completed, white smoke emerges from the chimney of the Sistine Chapel, signalling to the world that a new pope has been elected.