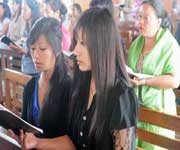 Pastors across Nagaland are working day and night in an effort to ensure clean assembly elections in the State on February 23. The priest, all members of the Nagaland Baptist Church Council (NBCC), hold prayers and go for door-to-door campaign to create awareness among the people about corrupt practices being adopted during the polls. Rev.Weyiete Lohe is one such Priest who preaches "One person, one vote." "Elect the right leader. Don't be influenced by money and fear no one. Please do not sell your vote. It is a sin," he says.


After the Sunday mass, he tells the believers that there will be prayers held outside every polling booth on the day of elections for moral pressure on both candidates and voters. The NBCC, which began its Clean Election Campaign in 2011, has already issued 13 guidelines to follow while voting.


The Council says the guidelines have been devised "on the basis of constitutional rights, the democratic spirit and Christian values". Among other things, it asks churchgoers — Nagaland is predominantly Christian — to avoid accepting bribes in cash or kind for their vote, keep only one voter identity card, honour individual right and freedom of choice, and look out for god-fearing, principled and capable candidates. It also advises its followers to avoid tampering with the date of birth and to register in the electoral rolls only after attaining 18 years of age. Multiple voting has been frowned upon and proxy voting disallowed.


"We have no other interests or any hidden agenda to support or stand against any political party," the NBCC says. "Our sole purpose is to tell the truth, to fight for the truth, to stand for the truth and to bring about a positive change in our society. We hope and pray that the people's movement, with God's grace, will usher in a new era of elections in our society. We may not see 100% success in the 2013 elections, but the good fight will go on and some day it will be possible for Nagaland to have clean polls."


The earnestness of the Church has hit a chord and people, especially the youth, have begun talking about it — in street corners, restaurants and their homes. Atso Kapfo, 24, says he will try his best to elect the right leader. Most are influenced by money these days, he mutters. "Candidates should not do that to the common man, and all of us must resist when such attempts are made." Source Times of India