February 12, 2013
Saint Gonsalo Garcia (1557–1597) was the first Roman Catholic Saint from India, born in 1557 in the Western Coastal Town of Vasai, which is a historical village North of Mumbai. He hailed from the Bassein Fort when the town was under Portuguese colonial rule. He was a Roman Catholic Franciscan member from India. He was beatified by Pope Urban VIII on September 14, 1627. He was declared Saint by Pope Pius IX on June 08, 1862. 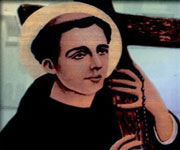 Gonsalo Garcia was born as Gundi Slavus Garcia on February 05, 1557 to a Portuguese father and a Canarese, Indian mother who resided at the Western Coast, in Bassein. He was educated by Fr.Sebastian Goncalves, a Jesuit Priest working in the college near Bassein Fort at Vasai. He studied Grammar, Philosophy and Roman History under the guidance of the Jesuits for eight years from 1564 to 1572. Gonsalo Garcia was willing to go to Japan with other missionaries. In 1569, he told Fr.Sabastian Gonsalves about his plan to go to the East, but his request was turned down since he was quite young and in 1572, Fr.Sabastian permitted him to go to Japan when he was fifteen. He surprised young Gonsalo by disclosing the news that he also has decided to leave to Japan.

Gonsalo Garcia and Fr.Sebastian Goncalves left the coast of Bassein in the first week of March 1572 and reached Japan in July. During the course of his journey, Gonsalo Garcia learnt Japanese language with the help of a Japanese person who accompanied him in the same ship. He soon managed to learn the language and made good friends with the Japanese people. Gonsalo Garcia was selected as a catechist by the Jesuit missionaries.

Gonsalo Garcia served them faithfully as a catechist for eight years. Meantime, he had expressed the genuine desire to join the Jesuit Congregation. Though promises of admission were held out to him, Gonsalo's Indian origin was a bar to his entry in the Society of Jesus. Fnally Gonsalo Garcia lost hope and resigned this position and left to set up a trade. His business prospered and branches were opened in different locales in Southeast Asia.

Gonsalo's long cherished dream to be a Jesuit did not materialize, so he moved to Manila in Philippines as a lay missionary. In Philippines, he was influenced by a Franciscan priest, Fr.Peter Baptista and soon joined the Seraphic Order as a lay brother. After working with the leprosy patients, there he was formally ordained as a Franciscan as the Friars Minor at Manila.

On May 26, 1592, the Spanish Governor of Manila selected Fr. Peter Baptista as the leader of the delegation on a diplomatic mission to Japan and since he did not know the Japanese language, Gonsalo Garcia was selected as his translator as well as his companion. Gonsalo was very happy with this offer that he immediately accepted the responsibility. The missionaries left Manila on May 21, 1593 and reached Hirado, a harbour in Japan, on July 08, 1593. In Japan, Gonsalo Garcia became the centre of attraction as he knew Japanese language well. He was the official member of Spanish translator of Fr.Peter Baptista. After facing some initial difficulties the Franciscan settled in Japan and began their missionary work in Miako, Osaka, etc. The Japanese King Toyotomi Hideyoshi, generally known as Taikosama, was very friendly with these Franciscans. It was a time when Jesuits were facing lot of opposition in Japan. The people of Japan appreciated the simple way of living adopted by these Franciscan missionaries. It helped them to accelerate their conversion programme. Many Japanese, including their landlords accepted the Christian religion. Slowly Japan became the great centre of evangelization for the Franciscan missionaries.


Read about St.Charles Spinola who also Martyred in Japan

The Franciscan missionaries were very successful in their conversion policy. Certainly, the Buddhist religious lenders became their arch enemies. They tried to influence the King to take action against Franciscans and to expel them, but the King refused to budge. But the situation worsened with the arrival of ill-fated Spanish ship 'San Felipe' (Saint Philip). It was bound from Manila to Acapulco in Spain but due to terrible tempest, it was driven to the coast of Japan. It was laden with Gold and Silver when it was anchored at Urado. The captain of the ship, Francisco de Olandia, whole conversing with the Japanese custom officials spoke boastingly of 'La Espanha de los Conquistadores' and unnecessary boasted that the Spanish king had captured many countries in the world. He wrongly told that the King of Spain sent the missionaries first to instigate the people against their ruler. When the matter was reported to Taikosama, he was wild with anger. The situation was exploited by Siyakuin Hoin, the king's physician. The king issued the order to arrest all the missionaries in Japan and kill them. After working for four years, the missionaries were placed under house arrest in their monastery in Miaco (Kyoto) on December 08, 1596 by the Japanese commander-in-chief. A few days afterwards, they were arrested and imprisoned.

On February 05, 1597, Gonsalo Gracia along with his companions was marched off in the depth of winter to be crucified just outside the city of Nagasaki, Japan under the Emperor Taiko-Sama. Brother Gonsalo, the first to arrive, went straight to one of the crosses which had all been made to measure for the prisoners and asked "Is this mine?". The reply was "It is not". Then he was taken to another cross, where he knelt down and embraced it. The others, one after another, started doing the same. "That was quite a sight, the way Brother Philip was embracing his cross…" comments one of the witnesses. Brother Gonsalo Garcia was the first to be extended on and nailed to his cross, which was then erected in the middle of those of his companions, as they were all lifted simultaneously. Two lances through the heart was the fate of each of the prisoners. While they waited for the fatal blows, Garcia and his 25 companions sang psalms and praises of God till the moment of their deaths, earning them the entire martyr's title.

On September 14, 1627, Gonsalo Garcia and his fellow martyrs were beatified by Pope Urban VIII and permitted the Jesuits and the Franciscans to venerate them. In 1629, the same Pope completed the beatification of these martyrs and their veneration was permitted throughout the Catholic Church. On June 08, 1862 Gonsalo Garcia along with his companions, were declared Saint by Pope Pius IX. Brother Gonsalo Garcia became Saint Gonsalo Garcia. The first catholic Saint from India and the Indian Sub-Continent and June 08, 2012 marked the 150th anniversary of his canonization. The martyrs' feast day occurs on February 05. Saint Gonsalo Garcia Church in Gass village of the Vasai Tehsil was built in 1942 and later expanded in 1957.