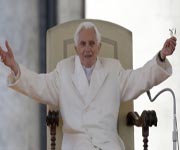 Pope Benedict XVI has thanked the Catholic faithful for their support in his final general audience before his resignation on Thursday. He recalled a papacy full of both joy and difficulty as he held his final general audience Wednesday the eve of his retirement as leader of the world's Roman Catholics. Around 150,000 people gathered in St Peter's Square to bid farewell to the Pope. Cheers filled St. Peter's Square as Benedict rode his special Popemobile amid the crowds who had started gathering early in the morning. National flags fluttered alongside banners bearing the simple word "Grazie," or "thanks."


"Thank you from the bottom of my heart, I'm really moved," he told the cheering crowds. It was one of the largest crowds to turn out for Benedict in the colonnaded piazza since he was elevated to the papacy nearly eight years ago. The 85-year-old pope, seated under a canopy on the steps of the grand basilica, responded in several languages to the greetings and tributes read to him from around the world.


"I need to thank God who guides the church and develops it and feeds faith in its people. Right now, my soul is open to embrace the entire church. And I would like to help everybody for the help I have received." Acknowledging the shock over his decision, Benedict said he had taken the step in full awareness of its gravity and novelty but with profound serenity of spirit.


At the end of the nearly 90-minute audience, Benedict stood to sing the Lord's Prayer in Latin but looked frail as he delivered a blessing to those assembled. Some cried, "Long live the Pope!" as he climbed back in his motorized cart for a final turn around the square.


Benedict will receive cardinals at the Vatican tomorrow morning before leaving from Vatican to his summer residence, Castel Gandolfo. Benedict will live out the remaining of his days "hidden from the world" in prayer and reflection.