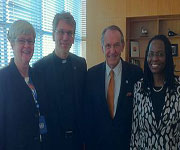 The General Secretary of the World Council of Churches (WCC), Rev.Dr Olav Fykse Tveit and other members of the WCC met with the United Nations (UN) Deputy Secretary General Jan Eliasson on February 12, 2013 in New York. Dr.Tveit and Eliasson discussed the many conflicts and divisions around the world, including North and South Korea, the Middle East region, particularly Syria and Israel-Palestine.


They also noted the problematic tendency of groups and nations to demonize "the other", and the role religions have sometimes played in these situations. In response, Dr.Tveit commented, "Religion has a critical role in the work of peace and justice. I'm convinced that the World Council of Churches is called to offer an alternative common voice in the public sphere."


Eliasson stated, "There can be no peace without development, no development without peace, and for lasting peace and sustainable development there must be respect for human rights and the rule of law. Given all that plagues the world today, no one institution like the UN or any other can address these all on its own. We must mobilize all actors, with each actor doing its part. To this end, we welcome any such partnerships with the World Council of Churches."


The other WCC office bearers participating in the meeting were Margareta Grape, WCC representative to the UN, Dr Isabel Phiri, Associate General Secretary for Public Witness and diakonia, and Rev.Garland F. Pierce, Senior Assistant to the General Secretary.