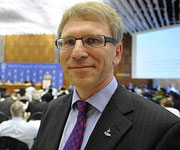 The resignation of Pope Benedict XVI has brought words of respect and appreciation from the General Secretary of World Council of Churches, Rev.Dr Olav Fykse Tveit. "We have to respect fully the decision of His Holiness Pope Benedict XVI to resign," Tveit said from New York. "With deep respect I have seen how he has carried the responsibility and burdens of his ministry in his advanced age, in a very demanding time for the church" Dr Tveit said. "I express my appreciation for his love and commitment to the church and to the ecumenical movement," Tveit added.


"Let us pray that God bless him in this moment and this phase of his life, and that God will guide and bless the Roman Catholic Church in a very important time of transition." "Pope Benedict knows the WCC well," Dr.Tveit said, referring to the time in the late 1960s and early 1970s when as a professor of theology at the University of Tuebingen, Germany, he was a member of the WCC Faith and Order Commission. Benedict first announced his decision in a meeting of cardinals at the Vatican on Monday, 11 February. His deteriorating health was cited as the reason for him to step down from his post as of the end of February.