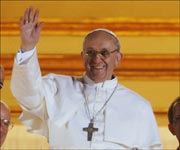 Pope Francis, giving his clearest indication yet that he wants a more austere Catholic Church, said on Saturday that it should be poor and remember that its mission is to serve the poor. He speaking mostly off-the-cuff and smiling often, made his comments in an audience for journalists where he explained why he chose to take the name Francis, after St. Francis of Assisi, a symbol of peace, austerity and poverty.


He called Francis "the man who gives us this spirit of peace, the poor man", and added: "Oh, how I would like a poor Church, and for the poor." Since his election on Wednesday as the first non-European pope in nearly 1,300 years, Francis has signaled a sharp change of style from his predecessor, Benedict, and has laid out a clear moral path for the 1.2-billion-member Church, which is beset by scandals, intrigue and strife.


He thanked the thousands of journalists who had covered his election but invited them to "always try to better understand the true nature of the Church, and even its journey in the world, with its virtues and with its sins". He urged journalists to seek "truth, goodness and beauty" in the world and in the Church.


Francis has set a forceful moral tone and given clear signs already that he will bring a new broom to the crisis-hit papacy, favoring humility and simplicity over pomp and grandeur. He recalled how on Wednesday night, as he was receiving more and more votes in the conclave, the cardinal sitting next to him, Claudio Hummes of Brazil, comforted him "as the situation became dangerous".


After the voting reached the two-thirds majority that elected him, applause broke out. Hummes, 78, then hugged and kissed him and told him "Don't forget the poor", the pope recounted, often gesturing with his hands. "That word entered here," he added, pointing to his head. While the formal voting continued, the pope recalled: "I thought of wars .... and Francis is the man of peace and that is how the name entered my heart, Francis of Assisi for me he is the man of poverty, the man of peace, the man who loves and protects others." It was the latest indication that the pope wanted the worldwide Church to take on an austere style.


On the night he was elected he shunned the papal limousine and travelled on a bus with other cardinals. He went to the Church-run hotel where he had been staying before the conclave and insisted on paying the bill. Francis, the former Cardinal Jorge Bergoglio, has also urged Argentines not to make costly trips to Rome to see him but to give the money to the poor instead.