A state of grace in Boston says President Barack Obama 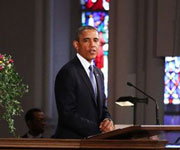 President Barack Obama delivered a heartfelt address at an interfaith prayer service for the Boston bomb victims at the Cathedral of the Holy Cross on Thursday, focusing his speech on the redeeming power of grace in the face of tragedy. Citing a poet who said Boston "is the perfect state of grace," Obama remarked: "And so we come together to pray and mourn and measure our loss. But we also come together today to reclaim that state of grace. To reaffirm that the spirit of this city is undaunted and the spirit of the country shall remain undimmed." "The grace this tragedy exposed is the best of who we are," he added.


In addition to the theme of grace, the president also highlighted the theme of endurance and quoted Hebrews 12:1 (NIV) in his remarks. "Scripture tells us to run with endurance, the race that is set before us," he stated. "To the injured, we will all be with you as you learn to stand, walk, and run again, yes, run again, for that I have no doubt you will run again," Obama said to a standing ovation. "We will finish the race."


The president sought to convey a tone of unity, saying that all Americans claim Boston as their town. "Boston, you're my home. For millions of us what happened on Monday is personal," Obama stated. "Our faith in each other, our love for each other, our love for country, our common creed which cuts across whatever superficial differences there may be, that is our power that is our strength."


The commander-in-chief thanked the city's mayor, the Massachusetts Governor, former Mass. Governor Mitt Romney, the people of Boston, and the families of those wounded or killed in Monday's attacks for their leadership, courage and grace. Obama visited patients recovering from Monday's bombings at the Massachusetts General Hospital in Boston.