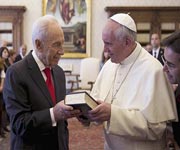 Israeli President Shimon Peres invited Pope Francis to visit the Holy Land during an April 30 meeting with him at the Vatican. Pope Francis received in audience at the Vatican, the Israeli President Shimon Peres and held talks on a variety of issues concerning the Middle East. President Peres also met the Secretary of State, Cardinal Tarcisio Bertoni and Archbishop Dominque Mamberti, Secretary of Relations with States.


“I am expecting you in Jerusalem, not just me but the whole country of Israel,” Peres told the Pope in the Apostolic Palace. He made his invitation in front of journalists after holding a private 30-minute meeting with the pontiff in which they discussed the ongoing conflicts in the Middle East. The Vatican released a statement noting that “a speedy resumption of negotiations between Israelis and Palestinians is hoped for.”


“So that,” it added, “with the courageous decisions and availability of both sides as well as support from the international community, an agreement may be reached that respects the legitimate aspirations of the two peoples, thus decisively contributing to the peace and stability of the region.”


Pope Francis and President Peres also spent time discussing the conflict that plagues Syria and hoped for a political solution that “privileges the logic of reconciliation and dialogue,” the Vatican communiqué said. The two heads of State also discussed relations between Israel and the Holy See, as well as relations between state authorities and local Catholic communities.Text


The Vatican stated that during their talks they appreciated “significant progress made by the Bilateral Working Commission, which is preparing an agreement regarding issues of common interest” and that a rapid conclusion is expected. The Bilateral Working Commission includes fiscal negotiations, which were resumed in 2004. Agreements still need to be reached on taxation and what degree of exemption Catholic churches and institutions have in Israel. Other issues involve agreeing on which ecclesiastical properties and what level of immunity of expropriation they should enjoy.


Ambassador Evrony says Israel “really hopes” for an early resumption of the stalled peace process between the Jewish state and the Palestinians. “There’s nothing that that the people of Israel want more than peace … peace with our Palestinian neighbours is one of our main goals,” he says.


President Peres will be travelling on May 01 to Assisi, Italy, the hometown of the Pope’s patron Saint, Francis of Assisi. There he will be awarded with an “Honorary Citizenship for Peace” and with a key to the city.