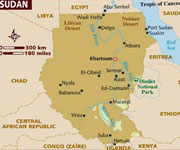 Sudan’s Minister of Guidance and Social Endowments, Al-Fatih Taj El-sir has announced that no new licenses for building churches will be issued. The Ministry of Guidance and Social Endowments oversees religious affairs in the country. During his speech to the parliament on April 17, he said that since South Sudan's independence in 2011 no new churches have been built in the country. He also claiming the existing ones are enough to accommodate congregations.

The minister attributed the reasons behind his decision to lack of worshippers and to the increasing number of abandoned churches. He nevertheless guaranteed to preserve the freedom to worship in the country. Starting late 2012 there have been increasing reports about the crackdown of activities of Christian institutions in Sudan.


The Human Rights and Development Organization (HUDO) pointed out in a report to the "systematic targeting of Nuba Christians" by Sudanese authorities in South Kordofan and institutions in Khartoum, as published by Radio Dabanga in March.


According to a news release from Christian Solidarity Worldwide (CSW), the minister explained the April 17 decision by claiming that no new churches had been established since the secession of South Sudan in July 2011 due to a lack of worshipers and a growth in the number of abandoned church buildings. CSW said he added that there was therefore no need for new churches, but the freedom to worship is guaranteed in Sudan. CSW said the decision was announced against the backdrop of a campaign of repression against Christians in northern Sudan that began in December 2012 and has continued into 2013.


Days before it was announced, the Catholic Information Service for Africa (CISA) reported that a senior South Sudanese Catholic priest, Father Maurino and two expatriate missionaries had been deported on April 12.


CSW said the two missionaries, one from France and the other from Egypt, worked with children in Khartoum. According to Father Maurino, no reason was given for the deportations. He added that Christians are in trouble in Sudan, since the Government has tried to Islamize the country and eliminate the Christian presence. CSW added, “There has also been a systematic targeting of members of African ethnic groups, particularly the Nuba, lending apparent credence to the notion of the resurgence of an official agenda of Islamisation and Arabisation.”


CSW continued, “The campaign of repression has continued into 2013, with foreign Christians being arrested and deported at short notice, and those from Sudan facing arrest, detention and questioning by the security services, as well as the confiscation of property such as mobile phones, identity cards and laptops. In addition to the arrests and deportations, local reports cite a media campaign warning against ‘Christianisation.’”


CSW said in February alone, at least 55 Christians linked to the Evangelical Church in Khartoum were detained without charge. CSW said on February 18, the cultural center of the Sudan Presbyterian Evangelical Church in Khartoum was raided by the National Intelligence and Security Services. Three people were arrested, and several items were confiscated, including books and media equipment. The three arrested were all from South Sudan. One was released days after the initial arrest.


CSW’s Advocacy Director Andrew Johnston said, “The recent spike in religious repression in Sudan is deeply worrying. The Minister’s claims of guaranteeing freedom to worship are at odds with regular reports of Christians being harassed arrested and in some cases expelled from the country at short notice.” He added, “We urge the Sudanese Government to end its campaign of harassment against the Christian community and respect the right of all of its citizens to freedom of religion or belief, as outlined in Article 18 of the International Covenant on Civil and Political Rights, to which Sudan is a signatory.”