Pope Francis appoints an advisory board of cardinals 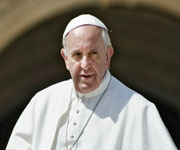 Just a month after becoming the leader of Roman Catholics around the world, Pope Francis has taken a giant step towards dismantling the huge Vatican bureaucracy that has been the cause of so many of the church’s problems. The pope’s appointment of an advisory board of cardinals from around the world must have sent shock waves through the Holy See, where the bureaucracy is so deeply entrenched that the governance has resembled some Third World dictatorship.


Pope Francis, obviously believes the status quo in Rome is unacceptable. The former cardinal from Argentina, which has 40 percent of the 1.2 billion Catholics, understands that the universal nature of the church must be reflected in key governing decisions. The advisory panel is made up of cardinals from the United States, Italy, India, Chile, Germany, Australia, Honduras and Congo.


Archbishop Sean Patrick O’Malley of Boston, who had been touted as one of the leading American candidates for pope, will be in a position to focus on the disconnect between Rome and the American Catholic Church. Many of the panel members have been outspoken in calling for a shake-up of the Vatican bureaucracy, which was last reformed 25 years ago under Pope Paul VI, Some church leaders and many Catholics, especially in the U.S., have called for an aggressive campaign to rid the church of pedophile priests and to deal with bishops who protected them after the abuse of children became known.


The child-abuse scandal has rocked the American Catholic Church and has contributed to a decline in church attendance and membership in this country and throughout Europe. The new pope has talked about the need to reach out to disaffected Catholics, but persuading them to return to the flock will take more than the appointment of a panel of advisors.