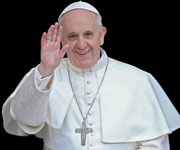 
The crowd that turned out for the Wednesday audience was one of the largest yet, with the attendance reportedly surpassing expectations by about 25,000 people. The Pope dedicated his address to the phrase from the Creed, “He will come again in glory, to judge the living and the dead,” continuing a series started by Benedict XVI for the Year of Faith. He began by noting that Jesus “often focused on the reality of his final coming” during his public ministry.


“Today I would like to reflect on three Gospel texts that help us to enter into this mystery: that of the ten virgins, the talents and that of the final judgment. All three are part of Jesus' discourse on the end times in the Gospel of St. Matthew,” he explained. At the present moment humanity is living between the moment of Christ’s Ascension and his final return, and this is the context Jesus used when he told the parable of the 10 virgins, the Pope said.


The parable involves 10 virgins who were awaiting the arrival of a bridegroom to his wedding feast. Five of them were wise and had extra lamp oil to provide light until he arrived, but five were foolish, having brought no extra oil. The foolish virgins were not able to notice the arrival of the bridegroom with their lamps out, and so they were left knocking on the door of the house where the feast was being held. “They were knocking insistently, but it was too late, the bridegroom responds, ‘I do not know you,’” the Pope recalled.


The Holy Father said that the time of waiting for the bridegroom – who is Jesus – is a period granted by God in his “mercy and patience,” and Christians should not fall asleep, keeping their faith alive through prayer and the sacraments. Turning to the parable of the talents, Pope Francis recalled how Jesus warned people against letting fear percent them from using the gifts God gave them.


“A Christian who withdraws into himself, hiding all that the Lord has given him, is not a Christian!” the Pope stated. “I would ask the many young people present to be generous with their God-given talents for the good of others, the Church and our world,” he added.


Pope Francis then spoke about the final parable, in which Jesus describes the final judgment as being like a shepherd who divides his flock into sheep and goats. Those on the right are those who followed the will of God in their lives, while those on the left did not. “This tells us that we will be judged by God on charity, on how we loved him in our brothers, especially the most vulnerable and needy,” he explained.


“Of course,” the Pope qualified, “we must always keep in mind that we are justified, we are saved by grace, by a free act of the love of God, which always precedes us, we alone cannot do anything. Faith is first of all a gift that we have received.” “Looking to the final judgment must never frighten us,” Pope Francis concluded. Source Catholic News Agency