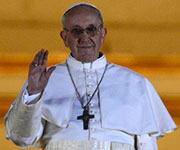 Pope Francis has directed the Vatican to act resolutely on ecclesiastic sex abuse cases and take measures against paedophile priests, saying the Catholic Church's credibility was on the line. The announcement was quickly dismissed by victims' advocates as just more talk. "Once again … a top Catholic official says he's asking another top Catholic official to take action about paedophile priests and complicit bishops," said Barbara Dorris.


"Big deal. Actions speak louder than words. And one of the first actions Pope Francis took was to visit perhaps the most high-profile corrupt prelate on the planet, Cardinal Bernard Law, who remains a powerful church official despite having been drummed out of Boston for hiding and enabling crimes by hundreds of child molesting clerics," Dorris said in a statement. Clergy abuse victims have called for swift and bold action from Francis as soon as he was elected pope last month. In the pope's homeland, Argentina, Roman Catholic activists had characterised him as being slow to act against such abuse while he was head the church there.


The clergy child abuse scandals in many countries have drained morale and finances from the church, driving countless Catholics away, especially in Western Europe. Some dioceses have had to close parishes and take other drastic actions after paying out millions for counselling and other compensation to victims in cases settled in and out of court. The Vatican's brief announcement on Friday emerge from the pope's meeting with Bishop Gerhard Ludwig Müller, the head of the congregation for the doctrine of the faith – the office that shapes and enforces church policy on what to do about any abuse allegations and what happens to the abusers.