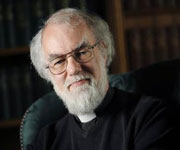 The former Archbishop of Canterbury Dr Rowan Williams is to become Chairman of the board of trustees at Christian Aid. He succeeds Dame Anne Owers as Chair of the Christian Aid board. He is stepping down as Archbishop of Canterbury at the end of December to take up a new position as Master of Magdalene College, Cambridge. He said he had become more aware of the priority of development and aid issues around the world during his 10 years as Archbishop. He takes up his position as Christian Aid chair on May 01, in time for the start of this year's Christian Aid Week, which kicks off on May 12. He said he was delighted to be a part of the development agency's work.


In his statement, he said "I believe it's of the first importance that Christians say we live from a set of values, the Kingdom of God that will challenge a great deal about the way the world runs". "While we're not in the business of violent revolution, or the expectation of overnight change we have to go on saying change is possible, we've seen it happen, we can make it happen and with the grace of God we go on with a commitment to making it happen”.


"Christian Aid has a major role to play in this with its fight against the systems and structures that force people to live in poverty. It is essential that the organisation retains its radical agenda for bringing about change”. "We are in Christian Aid because we're not prepared to sit down quietly under a system that seems unjust, that seems radically to push people out of the way for the sake of profit."


Announcing the appointment, Christian Aid Director Ms Loretta Minghella said: "Archbishop Rowan brings a passionate interest in tackling the symptoms and causes of poverty, a profound theological understanding and deep experience of addressing issues of environmental, economic and social justice with church and political leaders across the world. This is wonderful news for Christian Aid."


The appointment process was led by Kumar Jacob, Acting Chair of Christian Aid's board, and culminated in a process of approval this week by Christian Aid's sponsoring churches. Mr Jacob said: "Archbishop Rowan's leadership on issues of international development and the role of churches in the fight against poverty across the world has been exceptional. He said "I believe we have found in him the perfect Chair for the organisation at this time and a great custodian for the British and Irish churches' continuing work in tackling the scandal of poverty through their support for Christian Aid." Mr Jacob will continue as Acting Chair until Dr Williams takes up his position in May 2013.