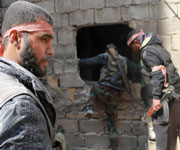 An association of Middle Eastern Christians on Tuesday said that two bishops Greek Orthodox archbishop Paul Yazigi and Syriac Orthodox archbishop Yohanna Ibrahim reportedly kidnapped by rebels in Northern Syria have been released. Two Syrian archbishops from Aleppo were abducted on Monday while traveling outside that besieged northern city, the official news media.


Church sources earlier on Tuesday said it did not know who was behind the kidnapping, but that a witness to the abduction who was travelling with the men said the kidnappers had foreign accents and light faces, and might be Chechens. Syria's religious affairs ministry said "there is evidence that those who kidnapped the bishops were Chechen mercenaries working under the leadership of al-Nusra Front." Nusra, a jihadist group fighting to oust the Syrian government, has pledged allegiance to al-Qaeda chief Ayman al-Zawahiri.


The kidnapped archbishops are the most senior church figures seemingly caught up in the fight between Government forces and rebels trying to end four decades of Assad family rule.


Razek Siriani, a representative of the Syriac Orthodox Archdiocese of Aleppo said that Yazigi and Ibrahim had been seized on their way to the Turkish border after a humanitarian mission to help release two priests kidnapped months earlier. He said that details of the kidnapping were unclear – the Syrian Government said on Monday that the bishops had been travelling to, not from, Aleppo – but that the driver had been shot dead and a fourth member of the group managed to escape.