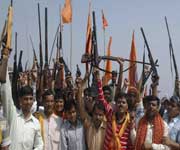 “Since the Bharatiya Janata Party (BJP) came to power in Karnataka, attacks against Christians have multiplied and all religious minorities in the State feel threatened," Dr.Sajan K George, President of the Global Council of Indian Christians (GCIC), told. On Sunday in fact, voters in Karnataka will choose a new chief minister and the BJP is leading a campaign based on its alleged support for minorities. However, the BJP, which has ruled Karnataka since 2008, is openly in favour of groups that belong to the Hindu Sangh Parivar, an ultranationalist movement that has perpetrated acts of violence and persecution against Christians and other minority communities.


“In 2012, the GCIC recorded 41 cases of anti-Christian attacks. In 2013, we are already at seven. However, these figures refer only to destroyed churches and imprisoned or assaulted Christians. If we were to account for every episode of intimidation, harassment, insults or temporary detentions, the number would be much higher", he added. The BJP is aimed at getting political support from militant Hindutva and is the main reason behind attacks against Christians and other minorities in the state. Hindutva is an ideology that views Hinduism as an exclusive ethnic, cultural and political identity.


At the same time, George said, "these extremist forces feel strong because of the political protection they receive and so persecute Karnataka's vulnerable minorities. Often, the primary responsibility for the violence lies with the police, which guarantees immunity to these groups." A striking example is the case of the Justice Commission headed by retired judge BK Somashekhar, which was set up by the BJP to investigate the anti-Christian violence that occurred in 2008.


He also said, "The commission exonerated Police, Government and Hindu fundamentalists of all charges, ignoring the dozens of witnesses who claimed the opposite. What is more, it called for the creation of a registry of Church properties and the monitoring of activities by parishes, pastors and their sources of income."