People in Karnataka say enough to the Hindu fundamentalists 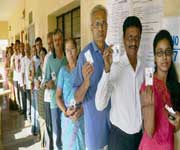 After seven years of unchallenged rule the Bharatiya Janata Party (BJP), a Hindu ultranationalist party loses control of Karnataka. The Congress, first party of India won the election gaining a full majority, with over 116 out of 223 constituencies. 113 are used to form the Government. The second party seems to be the Janata Dal (JD), and left only present in Karnataka and Kerala. The elections were held on May 05. In recent times, the party has tried all possible cards to regain consensus and grab votes, even on the skin of lepers. The BJP’s defeat is good news especially for social and religious minorities of Karnataka, victims in these years of violence and persecution of the Hindu ultranationalist groups, supported openly by the BJP.


The people of Karnataka has shown clearly that the fundamental principles of the Indian Constitution - justice, freedom, equality and fraternity - can never be sacrificed on the altar of fascist ideology based on hatred and on the divisions. Sajan K George, President of the Global Council of Indian Christians (GCIC), comments on the defeat of the BJP in the last elections of the State. After Seven years, the BJP has lost control of Karnataka, which will now be led by a Government weblog Congress emerged victorious from this vote. "The desperate cries of the weak - says the Christian leader - they defeated the fascist forces of Karnataka and ultra-nationalist, expressing a decisive verdict against the forces of corruption, moral and social, which are part of the political class that has dominated the state."


Sajan George recalls that "in the past years the religious minorities of Karnataka have been targeted in a systematic way. GCIC In 2012 recorded 41 anti-Christian attacks. In 2013 we are already seven. However, these data refer only to churches destroyed and faithful attacked or imprisoned. If we were to keep track of every episode of intimidation, persecution, insults or temporary detention, the number would be much higher. "


"The hidden agenda of the BJP - the president of the GCIC - was to have the political support of militant Hindutva and is the main reason behind the attacks against Christians and other minorities in the state. " With the defeat of the BJP, he adds, "the population of Karnataka has also launched a great message to all parties, in view of the general elections of 2014: we must stop the political use of religion, protect minorities and work for the common good ".