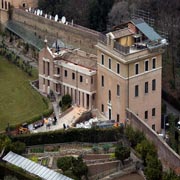 The Vatican became home to two Popes today for the first time in the history of the Roman Catholic Church when Pope Emeritus Benedict XVI moved back to the city state in the wake of his resignation. Benedict XVI, the pope emeritus, is set return to live in the Vatican on Thursday afternoon, beginning an unprecedented cohabitation: a retired pontiff living alongside a reigning one. After a two-month stay at the summer papal residence in Castel Gandolfo, south of Rome, Benedict is expected to return to Vatican City by helicopter. Pope Francis is scheduled to be waiting to greet him at Benedict's new home, the Mater Ecclesiae Monastery inside the Vatican Gardens. It is the second time the two men have met since Francis was elected: 10 days after his election, Francis travelled to Castel Gandolfo to meet his predecessor.


The unusual living arrangement has raised eyebrows among some Vatican watchers concerned that the presence of the former pontiff might somehow influence Francis, whether consciously or not. Benedict has tried to assuage those concerns, holding fast to his pledge that he will remain "hidden from the world" after his retirement, which began on February 28, nearly eight years into his pontificate. He was the first pope to resign in 600 years.


Benedict will live at the convent with his secretary, Archbishop Georg Gänswein, who is also the prefect of the papal household and the four women of the Memores Domini association, lay nuns with the Communion and Liberation movement, who have been part of the papal household for years, cleaning and cooking the pope's meals. A room has also been set aside for visits by the pope's older brother, Georg Ratzinger, who is a priest and lives in Germany, Vatican officials said.


The monastery was occupied for 20 years by a succession of orders of cloistered nuns entrusted with praying for the pope and the Roman Catholic Church, a task the pope emeritus has pledged to continue. They left in November, when restoration work on the structure began. Benedict has been seen in public only once since his retirement, during his visit with Francis. He appeared tired and frail, raising concerns about his health. Vatican officials say that he is not suffering from any specific illness and that his decline is linked to his age.