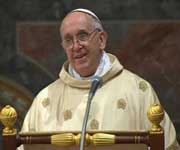 “Paul teaches us this journey of evangelization ... because he is sure of Jesus Christ and does not need to justify himself, to seek reasons to justify himself,” the Pope Francis said during Mass at the Chapel of the Domus Sanctae Marthae in the Vatican. “When the Church loses this apostolic courage, she becomes a stalled Church, a tidy Church, a Church that is nice to look at, but that is without fertility, because she has lost the courage to go to the outskirts, where there are many people who are victims of idolatry, worldliness of weak thought, (of) so many things.”


The Mass was conducted by Cardinal Francesco Coccopalmerio, President of the Pontifical Council for Legislative Texts and was attended by employees of the Vatican's general services of the governorate, tribunal chancery and the floreria, which cares for the state's furniture and decorations. Pope Francis upheld Saint Paul at the Greek Areopagus as a model of apostolic courage and evangelization. At that time, St. Paul sought dialogue with the Greek philosophers, saying their altar to the unknown God was a sign of the one true God. “Paul does not say to the Athenians: ‘This is the encyclopaedia of truth. Study this and you have the truth, the truth.’ No! The truth does not enter into an encyclopaedia,” said Pope Francis.


“The truth is an encounter - it is a meeting with Supreme Truth: Jesus, the great truth. No one owns the truth. We receive the truth when we meet it.” St. Paul's willingness to dialogue follows in the footsteps of Christ, who “spoke with everyone,” shunning neither sinners and tax collectors nor teachers of the Jewish law, he said. “The Christian who would bring the Gospel must go down this road: he must listen to everyone.”


The Pope said that as a child, one would hear in Catholic families, in my family, ‘No, we cannot go to their house, because they are not married in the Church.’ It was as an exclusion. No, you could not go. Neither could we go to the houses of socialists or atheists.” He said that one benefit of the last 50 or 60 years has been a change from this attitude. “Now, thank God, people do not say such things, right? (Such an attitude) was a defense of the faith, but it was one of walls: the Lord made bridges … Christians who are afraid to build bridges and prefer to build walls are Christians who are not sure of their faith, not sure of Jesus Christ.” Christians are called, like St. Paul, to “build bridges and to move forward,” he said.


“Let us today ask St. Paul to give us this apostolic courage, this spiritual fervor, so that we might be confident,” concluded the Holy Father. “'But Father,' you might say, 'we might make mistakes' ... 'Well, what of it,' I might respond, 'Get on with you: if you make a mistake, you get up and go forward: that is the way. Those who do not walk so as not to err, make the more serious mistake.'”