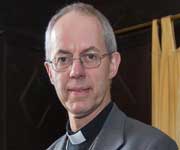 The Archbishop of Canterbury Most Reverend Justin Welby has thanked the Queen for her commitment during the six decades of her reign. He delivered the sermon at a service in Westminster Abbey on June 04, 2013 to celebrate the 60th anniversary of the Queen's coronation. The Queen of England - Elizabeth was accompanied by members of the royal family, including the Duke of Edinburgh, the Prince of Wales and Duchess of Cornwall and the Duke and Duchess of Cambridge.


In his address, the Archbishop said the Queen's coronation in the Abbey in 1953 and her public service since then have symbolised "the very nature of being British". Inviting the congregation to put aside the splendour of the spectacle for one moment, the Archbishop reflected on the moment she knelt before the altar 60 years ago and offered a silent prayer to God.


The Archbishop reminded the congregation of the moment when the Queen prayed at the Abbey's High Altar and said a prayer "at the beginning of a path of demanding devotion and utter self-sacrifice, a path she did not choose, yet to which she was called by God". He said Britain was "at its best" when "serving others with joy", such as during last year's Olympics, or in comforting and grieving "as on the streets of Woolwich".


The Queen, in turn, understood that: "The nature of power . . . is found neither in pomp and circumstance nor in public displays but in radical commitment, single-minded devotion and servant leadership. And for that we give thanks today. "The very nature of being British follows this simple logic."


Queen Elizabeth II was 27-years-old when she was crowned in Westminster Abbey on June 02, 1953. Members of the congregation included some of the choristers who had sung on that day. The congregation of some 2,000 guests joined together in singing hymns and the national anthem. Prime Minister David Cameron gave a reading from the Book of Kings.