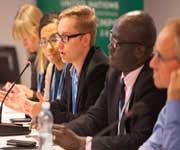 Youth delegates to climate-change talks from churches of the Lutheran World Federation (LWF) have initiated a call to fast with the poor and vulnerable who are affected by extreme weather events. The call was joined immediately by other faith-based organizations present at the COP 19 UN climate negotiations in Warsaw, Poland. More than 190 countries are represented at the COP 19 as it meets from 11-22 November in Warsaw to negotiate solutions to global climate challenges. One of the primary aims is to cut CO-2 emissions.
A delegation from the World Council of Churches (WCC) also is supporting for action at COP 19. At a celebration in the Roman Catholic cathedral, Lic Elias Crisostomo Abramides from the Ecumenical Patriarchate of Constantinople reminded listeners of the long commitment of the WCC on climate-change negotiations and urged an ambitious outcome of the negotiations at COP 19.
The urgency of the climate situation and the small window of opportunity are reflected in the Minute on Climate Justice recently adopted by the WCC Assembly in Busan, Republic of Korea. “Seeing how youth delegates are promoting creative ways to be in solidarity with the vulnerable communities, and doing it in an interfaith way, is a sign of hope in the middle of difficult and many times disappointing negotiations at COPs,” commented Dr Guillermo Kerber, WCC programme executive on Care for creation and climate justice.
More Missionaries News Updates Click Here!!!
Latest Christian News Updates