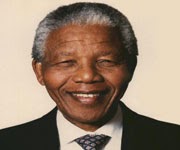 A renowned anti-apartheid activist and Nobel peace laureate who served as South Africa’s first black President, Nelson Mandela, 95, passed away on December 05 (Thursday) at his home in Houghton near Johannesburg. Calling Nelson Mandela a leader with hard-won wisdom and maturity unparalleled in our time, Rev. Dr Olav Fykse Tveit, General Secretary of World Council of Churches (WCC) gave thanks to God for Mandela’s life, which he described as a gift to South Africa and the whole world.

"He is now resting. He is now at peace. Our nation has lost its greatest son. Our people have lost a father. Although we knew that this day would come, nothing can diminish our sense of a profound and enduring loss".

He described Mandela as "a moral giant who embodied the dignity and the courage and the hope, and sought to bring about justice not only in South Africa, but I think to inspire millions of people around the world."

Pope Francis praised in a telegram to South African President Jacob Zuma, "the steadfast commitment shown by Nelson Mandela in promoting the human dignity of all the nation's citizens and in forging a new South Africa built on the firm foundations of non-violence, reconciliation and truth".

“He will be recalled as the leader who acted to unify a nation once deliberately divided along the lines of race,” said and added that Mandela was a “liberator who by force of his remarkable personality raised the dignity of Africans after centuries of colonialism, oppression and discrimination.”

“We thank God for giving us Mandela for 95 years. Through his life and works he has become an icon of dignity and freedom for all human beings.” “We will remember Mandela for his forgiveness he extended to his enemies and the perpetrators of apartheid, a quality very rare among many world leaders today.” “Our prayer is all that Mandela stood for may become part and parcel of our global values for justice, peace and dignity for the whole humanity”.

"Madiba is considered by many as the father of the nation. He modelled firm confrontation with evil and injustice, and magnanimity in his triumph over those who sought his destruction. His passing calls to mind the prophetic tradition of Micah that says: "He has shown you, O mortal, what is good. And what does the LORD require of you? To act justly and to love mercy and to walk humbly with your God. (Micah 6:8)."

He said Nelson Mandela will always be an "inspiration" for those involved in humanitarian work. "Mandela was probably the greatest leader of our age, a tireless, fearless advocate for the needs of some of the most vulnerable people in our world, particularly children. He believed in justice, and wasn't afraid to do what he thought it would take to achieve it. Mandela's death is, of course, most keenly felt in his home country, and we join with South Africans in sending our condolences to his family, and in mourning his loss. "Many of the children we work with, and our staff, have life-changing stories to tell of meeting Madiba over the years. All talk of his great compassion, and his tireless commitment to seeking justice and change." "He knew when to get his hands dirty and when to be diplomatic. He made the world better for countless millions of children. What better legacy is there than that?"

“We join with his family, the people of South Africa, and people all across the world in prayer and mourning, but also in celebration of the character and accomplishments of this great man,” said in a joint statement today.

The Most Reverend Desmond Tutu

"God was so good to us in South Africa by giving us Nelson Mandela to be our President at a crucial moment in our history. He inspired us to walk the path of forgiveness and reconciliation and so South Africa did not go up in flames. Thank you God, for this wonderful gift who became a moral colossus, a global icon of forgiveness and reconciliation. May he rest in peace and rise in glory."

The Archbishop of Canterbury- Most Reverend Justin Welby

He has offered his prayers for friends and family, as well as the nation of South Africa. "The death of President Nelson Mandela was announced in memorable words by president Zuma. South Africa has lost its greatest citizen and its father. Nelson Mandela, fighting to the end, is freed to be with his God in joy and reward for his great service and sacrifice. We pray for his family, for his friends and for his country. We are challenged to show the same degree of humanity, of courage and of generosity."

Director of Advocacy at the Evangelical Alliance- Dr Dave Landrum

"Nelson Mandela stands out among world politicians because, although he suffered greatly for justice, he never forgot mercy”. "With his political leadership characterised by humility, dignity and integrity, he has left a legacy to the Republic of South Africa of reconciliation and hope for a better future. He reminds us all of our obligation to speak truth to power and to demand government for the good of all."

"The world has lost a great leader. Nelson Mandela was a model of courage, vision and personal sacrifice. Today more than ever we need this kind of leadership. May the memory of Nelson Mandela inspire a new generation of such leaders around the world."
More Missionaries News Updates Click Here!!!
Latest Christian News Updates