‘Walk together behind the Lord,’ Pope encourages new Cardinals 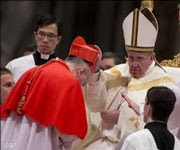 Pope Francis created nineteen new Cardinals on Saturday, the Feast of the Chair of St Peter the Apostle. The newly created Cardinals received the insignia of their office – the red biretta and the cardinal’s ring – in a streamlined ceremony conducted entirely in Latin. St. Peter’s Basilica was filled with nearly 200 members of the College of Cardinals and those who had gathered to witness the event. During that time, the Pope urged the prelates gathered in St. Peter’s Basilica to serve the Church fearlessly.

Pope Francis’ predecessor Pope Benedict XVI joined the other bishops, wearing his customary white garments rather than the red vestments of a cardinal. Pope-emeritus Benedict XVI, whom Pope Francis had invited to share in the occasion. The Pope and the Pope-emeritus embraced warmly and exchanged greetings before the ceremony began.
Reflecting on the gospel, the Pope Francis noted that in the scriptures, “Jesus is often walking and he teaches his disciples along the way. This is important. Jesus did not come to teach a philosophy, an ideology… but rather ‘a way,’ a journey to be undertaken with him.” “The Church needs your courage, to proclaim the Gospel at all times, both in season and out of season, and to bear witness to the truth”, the Pope emphasized.
In his allocution, Pope Francis encouraged the whole College of Cardinals to recognize their office as one of service and readiness for sacrifice. “The Church needs your courage, to proclaim the Gospel at all times,” said Pope Francis, “both in season and out of season, and to bear witness to the truth.”
The Holy Father went on to say, “The Church needs your prayer for the progress of Christ’s flock,” reminding the Cardinals that prayer, along with the proclamation of the Word, is the primary task of the Bishop. Calling on the Cardinals to pray especially for suffering peoples and to express with him their spiritual closeness to the ecclesial communities and to all Christians suffering from discrimination and persecution, he said, “The Church needs us also to be peacemakers, building peace by our words, our hopes and our prayers.”
He then continued the ceremony, reading the formula for the creation of new cardinals, followed by the names of each of the 19 men. The College of Cardinals said the creed together, pledging their fidelity and obedience to the Pope and his successors. Each of the new cardinals knelt before the Pope to exchange the sign of peace and receive their assignment of a church in Rome - a sign of their participation in the Pope’s pastoral care. They were also given the zucchetto, the tri-fold hat called a “biretta,” and the ring of a cardinal.
Pope Francis concluded his remarks by thanking the Cardinals and encouraging them to “walk together behind the Lord.”
With the new cardinals, there are now 218 total living cardinals of whom 122 are under 80 years of age and thus eligible to vote in a conclave. One of the new cardinals, the elderly Italian Archbishop Loris Francesco Capovilla (98), was not present. He is the former Secretary of Pope John XXIII and one of the longest-serving archbishops. In the next few days, the cardinal’s hat will be delivered to him in the town where he resides in the North of Italy.