Pope appoints new head for the Catholic Church in Nepal 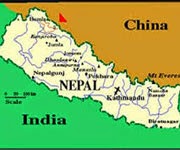 Pope Francis on Friday appointed a new head for the Catholic Church in Nepal. Fr. Paul Simick, the parish priest of the cathedral parish of the Indian diocese of Darjeeling is the new Vicar Apostolic in Nepal, replacing 76-year old Jesuit Bishop Anthony Francis Sharma, who has retired. He was born on August 07, 1963 at Gitdubling in Darjeeling diocese. He was studied philosophy and theology at the Morning Star Regional Seminary, Barrackpore, Kolkata, and later obtained a Master’s degree in English.
After his priestly ordination on April 09, 1992 he served as parish priest of St. Maurice Parish, Suruk, Darjeeling, until 1995, when he was sent to Rome for a licentiate and doctorate in Biblical theology from the Pontifical Urban University. On his return, he taught scripture at the Barrackpore regional seminary and served in parishes and schools.
The Catholic Church of Nepal as it is today took shape under now retired Bishop Sharma, a native of Kathmandu. Pope John Paul appointed him Superior of Nepal in 1984 and Prefect of Nepal in 1996. On Nepal being raised to the rank of Apostolic Vicariate in 2007, Msgr. Sharma was appointed its first Vicar Apostolic, thus becoming the nation’s first bishop. The Apostolic Vicariate of Nepal, which is not a diocese as yet, has an area of over 147, 000 sqkm. Catholics number nearly 8000 out of a population of more than 28.5 million and are served by 71 priests and 170 sisters in 8 parishes.
The Catholic faith was first introduced in Nepal in the 18th century, but no missionary was allowed there from 1810 to 1950. Catholic missionaries entered the Hindu kingdom as educators in 1951. However, conversion was banned until 1990 when a new constitution was made that allowed practice of other religions. However, it did not guarantee religious freedom to Christians. In 2006, Nepal was declared a secular state, ending the existence of the world’s only Hindu nation.
More Missionaries News Updates Click Here!!!
Latest Christian News Updates