Showing posts from August, 2014
Show all

WCC gives thanks for the life and works of Samuel Isaac 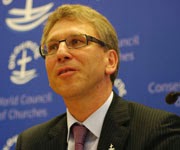 The World Council of Churches (WCC) General Secretary Rev. Dr Olav Fykse Tveit has given thanks for the life of Samuel Isaac, whom he said made contributions in the “search for unity” and in the churches’ “determination to respond to the needs of people”. Samuel Isaac, who served as Deputy Director of the WCC’s former Commission on Inter-Church Aid, Refugee and World Service (CICARWS), passed away on August 20 in Chennai, India at the age 72.
Post a Comment
More + 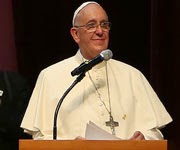 Following his Angelus prayer, delivered in St Peter's Square with tens of thousands of pilgrims, Pope Francis once again turned his thoughts to the beloved land of Ukraine, which celebrates its Independence Day on August 24. Pope Francis recalls the situation of conflict that creates a lot of suffering among the civilian population and appealed for peace in Ukraine.
Post a Comment
More + 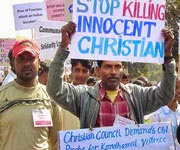 The Christian Organisations in India are planning to organise a solidarity programme with the victims of the Kandhamal anti-Christian violence on its 6th Anniversary at its Capital. The solidarity programme named 'Kandhamal: Never Again' event will be held from 3:00 p.m. - 7:00 p.m. on Monday, August 25, 2014 at Jantar Mantar, New Delhi to mark the sixth year anniversary of communal violence against Christians in Orissa state's Kandhamal district. The organisers have invited artists, intellectuals, NGOs, Civil Society groups and likeminded people to join in event to show their support and solidarity with the victims.
Post a Comment
More +

Pope Francis meets leaders of other Churches and faiths in Korea 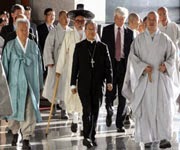 Pope Francis met the leaders of the different Christian Churches on Monday in Korea, together with the heads of the other main religious communities. The meeting was held in Seoul’s Catholic cathedral, just ahead of a concluding Mass. Pope Francis had an opportunity to meet briefly with Korea’s religious leaders.
Post a Comment
More + 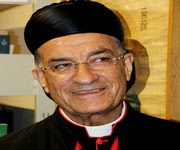 High officials from ancient Christian churches in the Near East have issued a common statement denouncing the emergence of armed extremist groups who “murder, shatter and violate the sacred nature of the churches” and other suffering communities in the Middle East. The church leaders call upon the international community, by action of the United Nations Security Council and the International Court of Justice, to restore the rights and homes of civilian populations and guarantee a return to land that has been taken from them.
Post a Comment
More +

Pope concludes Korean visit with call for peace and reconciliation 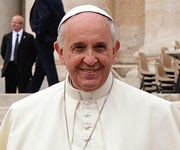 On the final day of his visit to Korea, Pope Francis celebrated Mass for peace and reconciliation in Seoul’s Myeong-dong Cathedral during which he prayed for the grace of healing and unity on the divided Korean peninsula. At the beginning of the Mass the Pope also had special words of support for a group of elderly ‘comfort women’ forced into prostitution for the Japanese military during the Second World War.
Post a Comment
More +

Card. Oswald Gracias wishes to be touched by passion of Korean Church 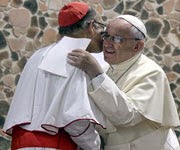 Cardinal Oswald Gracias, Archbishop of Bombay and President of the Federation of Asian Bishops’ Conferences (FABC) wished to be touched by the passion of the Korean Church as it faces new challenges brought about by globalization. He was addressing Pope Francis Sunday morning on behalf of the Asian Bishops at the shrine of the unknown martyrs at Haemi Shrine in South Korea’s Daejeon Diocese on August 17, 2014.
Post a Comment
More + 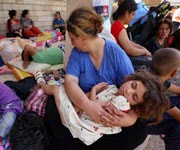 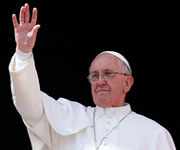 On the second day of his visit to South Korea, Pope Francis asked young people gathered at the Shrine of the Korean Martyrs at Solmoe, from across the Asian Continent to pray for the unity of the Korean family and he emphasized that the two are “one family,” calling for prayers of re-unification while stressing repentance and forgiveness. “There is only one Korea, but this family is divided,” the Pope said.
Post a Comment
More + 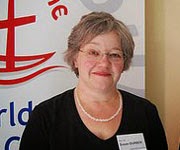 The leadership of the Council’s consultative bodies of World Council of Churches (WCC) were selected at the Central Committee meeting of the World Council of Churches (WCC) which was held in July at Geneva, Switzerland. These bodies will steer through the work of the WCC in accomplishing the call from its 10th Assembly to engage in a “pilgrimage of justice and peace”. The WCC assembly was held in the Republic of Korea in 2013.
Post a Comment
More + 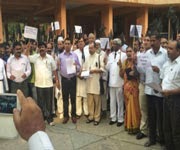 Christians observed the signing of India's Constitution as 'Black Day' on Tuesday, August 12, 2014 in New Delhi showing their solidarity with Dalit Christians and Dalit Muslims who have been denied the Scheduled Caste status for the past 64 years and called the Presidential order of 1950 as "discriminatory" and "unconstitutional" and have demanded the Union Government to resolve the matter immediately based on Justice Jagannath Misra Commission’s report.
Post a Comment
More +

Amid preparations for his August 14 to 18 trip to South Korea, Pope Francis has sent a video message greeting the people of the country and offering special encouragement to the youth and elderly. The Holy Father recalled the words of Isaiah, “Arise, shine!” He reflected that “it is the Lord who invites you to receive his light, to welcome it in the heart, to reflect it in a life full of faith, of hope and of love, full of the joy of the Gospel.”
Post a Comment
More + 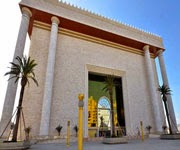 A 10,000-seat rendition of Solomon's Temple was inaugurated by a Brazilian billionaire preacher during the last week in Sao Paulo, Brazil, owned by the Universal Church of the Kingdom of God. It was designed to be a $300 million replica of the original Temple of Solomon, as noted in the Bible's Old Testament. The new temple will be one of Brazil's largest religious structures, dwarfing Rio de Janeiro's iconic Christ the Redeemer mountain-top statue.
Post a Comment
More +

NCCK organises march and vigil for peace and reunification 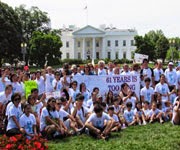 About 300 Christians marched for peace and reunification of the Korean peninsula and held a vigil in Washington D.C. on July 26– marking the 61st anniversary of the signing of the Armistice Agreement which ended the Korean War in 1953. The participants included representatives from the National Council of Churches in Korea (NCCK), as well as from the United Methodist Church (UMC), which hosted the event. The participants marched from the Foundry United Methodist Church to Lafayette Park, located at the rear of the White House.
Post a Comment
More + 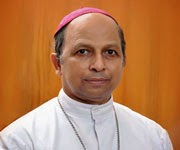 Delhi Archbishop Anil JT Couto has called for immediate action by the local police and civil authorities to stop what he called "hate campaigns" against Christians in North India and said it is a "grave assault on the fundamental rights of individuals and groups". He has expressed deep concern at the growing number of communal flare-ups in different parts of north India and attacks on Christians and Church properties in and around Delhi.
Post a Comment
More + 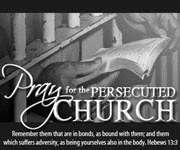 Pastor Simon Stanley, a resident of Perur, was heading a congregation of Apostolic Christian Church in Perur near Coimbatore City. One of his believer named Bagavathi, who was staying in a nearby village named Goundanur invited Pastor to come to her house and pray for her 12 years old girl who had a fractured hand. Accordingly, the pastor visited her house evening about 7.00 pm on Sunday, August 03, 2014 with few believers and prayed for the girl.
Post a Comment
More + 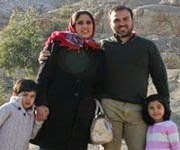 Nearly two years after a citizen of United States was imprisoned in Iran for his Christian faith, calls for his release continue. “In Iran, U.S. Iranian citizen Pastor Saeed Abedini remains imprisoned. The Iranian authorities sentenced him to eight years behind bars simply because of his religious beliefs,” said United States Secretary of State John Kerry. He also said that the U.S. “will continue to call for his release, and we will continue to work for it,” uniting with efforts from other government officials, including President Barack Obama.
Post a Comment
More + 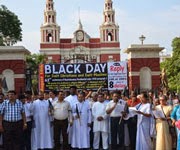 All Christian denominations in India has planned to observe August 10, 2014 as “Black Day” to protest against the discrimination meted out by the Government to Dalit Christians and Dalit Muslims by not granting them Scheduled Caste benefits as a blatant act of religious discrimination and in contravention of the Constitutional provision of equality. They have been observing August 10 as Black Day since 2010, as it is the date on which the controversial order was signed in 1950.
Post a Comment
More +

Cardinal Edward Bede Clancy on his way to Paradise 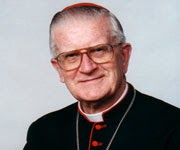 The Archbishop-emeritus of Sydney, Cardinal Edward Bede Clancy, passed away on Sunday morning at the age of ninety at a nursing home in Sydney's east, the Little Sisters of the Poor in Randwick, after years of ill health. He was the seventh Archbishop of Sydney, serving between 1983 and 2001. Among Cardinal Clancy's many contributions to the Australian Church, his leadership was vital in the canonisation of Australia's first saint, Mary MacKillop. Former Archbishop of Melbourne George Pell, now a senior Vatican official, succeeded Cardinal Clancy as the head of the Sydney church. The Apostolic Administrator of Sydney, Bishop Peter Comensoli, remembered Cardinal Clancy as, "[A] great churchman and a true leader with total dedication to his vocation."
Post a Comment
More + 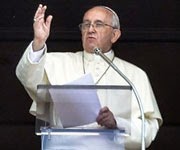 Pope Francis prayed the Angelus with the faithful gathered beneath a dreary, drizzly early August sky in St. Peter’s Square this Sunday, the eighteenth Sunday in Ordinary Time, on which the account of the multiplication of the loaves and fishes from the Gospel according to St. Matthew (14:13-21) is proclaimed. It was on the Lord Jesus’ miraculous feeding of the five thousand that the Holy Father focused his remarks ahead of the traditional prayer of Marian devotion at midday.
Post a Comment
More + 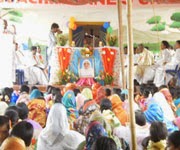 The villagers in Chainatalanarva, Andhra Pradesh, India, now have a church of their own where they can pray, "Legacy of a true missionary who was taken from Italy and planted in Vegavaram to produce fruits of love and charity in the name of Jesus," said Fr Almaraj, Jesuit provincial in the Indian state, as he spoke about Sister Ida Moiana, a missionary of the Immaculate who spent 63 years in India, devoted to children and people suffering from leprosy.
Post a Comment
More + 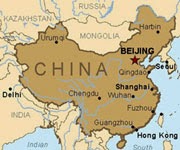 Chinese authorities are increasing their attacks on churches since they perceive the growth of Christianity as a threat to their communist regime. Security officials have forcibly removed crosses from two churches in the coastal province of Zhejiang and now plan to demolish more than 100 of its churches. The Government officials have already disrupted church services, confiscated or destroyed church property and detained congregations in Beijing and elsewhere.
Post a Comment
More +
More posts