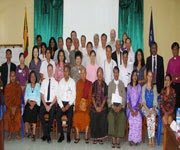 Participants in a recent World Council of Churches (WCC) consultation in Myanmar have stressed the need to equip churches and ecumenical organizations to build peace, human security and human dignity in order to move beyond conflicts, towards a world of peace. They reiterated the concept of shalom as the basis of peace with justice. Though, the Asian continent, where 60 percent of the world’s population lives, is applauded as the centre of world economic development and growth, it still continues to struggle to overcome threats to peace, justice and human rights.

The regional consultation titled “Building Peace, Human Security and Human Dignity” was jointly organized by the WCC’s Commission of Churches on International Affairs, the Christian Conference of Asia and the Myanmar Council of Churches (MCC), from 24 to 25 November in Yangon. The event was held in conjunction with a week-long celebration of the centenary year of the MCC, bringing together lay and ordained theologians and church leaders from South and South East Asia. About forty church and ecumenical leaders from Myanmar, Bangladesh, Indonesia, India, Nepal, Laos, Thailand and Sri Lanka participated in the consultation.
The dialogue at the consultation underlined how the lack of peace in Asia is to be understood not only in the context of armed conflicts but also in the context of structural violence. The negation of socio-economic and cultural rights that exacerbate existing inequalities lead to further violation of basic human rights and human dignity, the participants stressed.
While sharing in-depth case study analysis of South and Southeast Asian nations, the participants identified a number of factors that lead to destabilization of states and potentially to armed conflicts. Increasing poverty, inadequate health care, exploitation of natural resources and environmental degradation, militarization, arms buildup, and proliferation of nuclear weapons, were among the factors identified.

The discussions at the consultation also highlighted reasons behind the instability in some Asian countries: the spread of small arms and light weapons; domination of major powers; ethnic and religious conflicts, communal violence, political unrest and human rights abuses; suppression of the right to self-determination; lack of the rule of law and democratic governance.
The participants shared how the concepts of peace, justice and righteousness are deeply rooted in prophetic traditions. Asian churches should raise their voices against the abuse of power, unjust political systems and exploitation of the poor, the needy, the minorities and the powerless.
They also stressed the need for a “kairos moment in the history of Asia - a moment of socio-economic and political transformation, a moment of truth seeking peace, justice, reconciliation and restoration of human dignity”.
Dr Ashin Dhamma Piya, representing the Buddhist community called for clear understanding of problems, educational reforms and respect for one another. Kathleen Thein, representing Hindu communities in Myanmar, stressed the need for empathy, readiness to help everyone without hurting anyone, promotion of interfaith understanding for the sake of unity, reaching a viable consensus to gain happiness and peace. Prof. Al-haj U Aye Lwin, Convener of the Islamic Centre of Myanmar said that “Jihad is not Holy war. There is nothing holy about war. In fact, war fought in the name of God is war against God”.
WCC Programme Executive for Human Rights - Christina Papazoglou underlined the importance of holding this consultation in Myanmar at this moment in time, when the country is going through a very promising but also challenging peace process. “Given the ethnic but also religious connotations of the conflict, interfaith dialogue and cooperation is of vital importance in order to move towards a lasting peace for all the people of Myanmar,” she added.
More Missionaries News Updates Click Here!!!
Latest Christian News Updates