WCC gives thanks for the life and service of Ninan Koshy 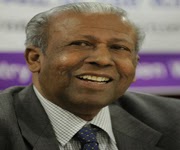 The World Council of Churches mourns the loss of Prof. Dr Ninan Koshy who passed away unexpectedly in Thiruvananthapuram, Kerala, India on March 04, 2015, shortly after his 81st birthday. “He has left an indelible mark on the WCC and the wider ecumenical movement with his incisive analyses of global issues and his theological insights on the churches’ responsibility to witness for truth, justice and peace in a deeply troubled world,” said the WCC General Secretary Rev. Dr Olav Fykse Tveit in an official tribute to Koshy issued from the WCC on March 06, 2015. “The WCC and the world-wide ecumenical movement to which Dr Koshy devoted so much of his life mourns his passing,” Tveit added.

Prof. Dr Ninan Koshy joined the WCC staff as Executive Secretary of the Commission of the Churches on International Affairs (CCIA) in July 1974 and served as its Director from 1981 to 1991. He has left an indelible mark on the WCC and the wider ecumenical movement with his incisive analyses of global issues and his theological insights on the churches’ responsibility to witness for truth, justice and peace in a deeply troubled world.
Dr Koshy was a devoted academic and teacher. He graduated from St. Berchmans College of the Catholic Archdiocese of Changanassery, took a masters in English literature from St. John’s College in Agra and then taught at Bishop Moore College in Mavelikara (Kerala). He became deeply involved in the World Student Christian Federation (WSCF), especially among its national movements in Asia. In 1973 he joined the staff of the Ecumenical Christian Centre, Whitefield, Bangalore and served first as its Associate Director and then as Director-in-Charge. Then - on the recommendation of his mentor M.M. Thomas – he was invited to join the staff of the CCIA.
In Geneva, he assumed responsibility for the program on militarization and the armaments race organizing a series of international ecumenical consultations that broke new ground, for example in identifying militarization as an underlying cause of war and conflict. The definition of militarism developed there was subsequently applied by the United Nations in its Commission on Human Rights. At a critical moment in the nuclear arms race he organized, together with Paul Abrecht, Director of the WCC Department of Church and Society, the Public Hearing on Nuclear Weapons and Disarmament held in Amsterdam in 1981, and co-edited its report, Before It’s Too Late. WCC General Secretary Philip Potter reported its findings directly to the plenary of Second Special Session of the UN General Assembly on Disarmament (SSDII) in New York in 1982 where they proved to be influential.
He engaged personally in initiatives aimed at peaceful resolution of conflicts in different parts of the world, meeting with churches, government and political leaders and reported on them through a series of CCIA Background Information that was read in both church and political circles. He was a compelling speaker whose astute analyses of international affairs became high points of meetings of the WCC Central Committee. Partly in response to them the representatives of the churches tended to focus more and more on international political concerns during their meetings. Although serious in his work, Koshy maintained his relaxed demeanor and his sense of humour.
He was a gifted and prolific writer, in both English and in his mother tongue, some of the latter products have become classics of Malayalam literature. His very first book written under M.M. Thomas’s tutelage in 1968, Caste in the Kerala Churches was even then called path-breaking and it has been reissued recently with a postscript on the contemporary situation.
Upon “retirement” from the WCC, Prof. Koshy accepted an invitation to become a Visiting Fellow in the Human Rights Program of the Harvard Law School in Cambridge, Massachusetts. His dissertation there, “The United Nations and the Protection of Human Rights in Internal Conflicts, A Case Study of the U.N. Security Council Action with regard to ‘The Civilian Population in Kurdish Populated Areas in Iraq’,” was published in 1992 and signaled his return to journalism and academia.
Back at home in India he became a fellow of the Faculty of Law at the University of Delhi, taught at other universities, was granted an honorary doctorate in theology by Serampore University and was named member of the Kerala University Senate. He remained devoted to the ecumenical movement and at the request of the Christian Conference of Asia he edited the two-volume work, A History of the Ecumenical Movement in Asia, published in 2004. His written production in books, newspapers, and periodical journals was prodigious and appeared regularly, and right up to the day he died he was still writing and at work on new projects.
The WCC and the world-wide ecumenical movement to which Dr. Koshy devoted so much of his life mourns his passing. It is, however, especially to his beloved and devoted wife Susan and daughters, Mariam Shiney, Achamma Niney, and Elizabeth, to whom we offer our most heartfelt condolences and our deep affection. By the grace of God, Ninan is now reunited with the guardian angel of the family who departed too soon and has looked over and awaited him ever since with arms open wide. In this time of Lent, as we prepare again to celebrate the one God sent to show us the fullness of life and through the Resurrection of Christ made manifest the promise of life eternal, we give thanks for blessing of having Ninan Koshy among us. May he rest in peace.
More Missionaries News Updates Click Here!!!
Latest Christian News Updates