September 11, 2015
Sister Sarah Navaroji, a pioneer in Tamil Christian devotional music and a prolific composer, wrote countless Christian songs praising the virtues of Lord Jesus Christ was born in Madurai, Tamilnadu, India. She was the Founder of Zion Gospel Prayer Fellowship Church. She has written 365 songs in her last 50 years. She was awarded doctorate by an International University in Rhode Island. The renowned Audio production company – HMV was published her songs continuously. 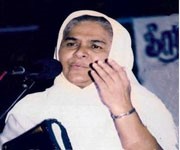 She was born in 1939 at Madurai, Tamilnadu, India in a Christian family as the youngest child. Her father, Solomon Asirvadham was a Violinist and Carnatic music teacher and her mother Soundaram Ammal was a teacher. She learned Carnatic music from her father. At her young age, identifying her love for music, her father gave her a surname ‘Navaroji’ instead of his own name. Navaroj is a raga in Carnatic music. Her father named his three daughters after Carnatic ragas: Lalitha, Vasantha and Navaroji and taught them music.

Gets award from UN Organization

At the age of 10, her father was died. While schooling, she was participated a song competition of UN Organization and won first prize when she was a student of Bentinck Girls' High School. At the age of 15, she was accepted the Lord as her Saviour.
Continue Reading . . . .

After studying, she joined Tamil Nadu Electricity Board and then she resigned her job after she saw a vision and realized the calling of God upon her life and began to work full-time Ministry. In her prime Youth, in the year of 1960, she entered the Lords Ministry in Obedience to the great call of her Master Lord Jesus Christ who Commissioned her with four fold Ministries of four P's that are Poetic Song Ministry, Preaching Ministry, Planting of Churches Ministry and Prophetic Ministry.

In 1960, when she was 21, planned to a mission trip to Ceylon, Sri Lanka. To reach the coastal town, she had to take a train from Danushkodi and at the Railway Station she eagerly waited for her mother’s arrival to see her off. Although time ticked on, her mother did not turn up when she penned a Christian lyric ‘Ennai Marava Yesu Nadha’. It went on to become so famous that the song is sung in all Tamil churches across the world to this day. The year was 1960 and composer-singer Sarah Navaroji was getting into her stride.

She reached Chennai, Tamilnadu on June 12, 1962 and stayed along with her mother and her elder Sister Lalitha Evangeline's family. Then, she started conducting a small Prayer Meeting in theirs premises. The small prayer meeting, she was conducting has become a small Prayer Fellowship and the people started coming regularly. In the year 1962, her earnest efforts, the small prayer meeting was grown to be Zion Gospel Prayer Fellowship Church as per the Lord's will. Now the Zion Gospel Prayer Fellowship Church founded by her is functioning at 46, Kuttiappan 2nd Street, Kilpauk, Chennai – 600 010.
Her Hard Work, Dedication, Obedience, Sanctification and Consecration are the aspects that have impressed the Lord to entrust her with such a great task of manifold ministries. Through her Preaching and Prophetic Ministry many are blessed and have received God's deliverance throughout the World.

She wrote many Christian Devotional songs. In her songs, music, grammar systematically pursued. Among this, all-time favourites such as ‘Konjakalam Yesuvukagaa’, ‘Thothiram Paadiyae', ‘Thirupatham Nambi Vandaen' and ‘Unnathamanavarin' are often heard on various occasions but many may not know that these are her works - they are among her many evergreen hits.
In lilting Tamil related to poetry, the substance of which is comforting and makes one focus on God, her compositions are marked by all the finer nuances of music grammar with pallavi, anupallavi and saranams in place. Hence music directors such as Sathi Victor, Kalyanam, Mangalamoorthi, Henry Daniel, Richard Vijay and Andrew Augustine found it a pleasure to score music for her many albums.
A pioneer in Tamil Christian devotional music, she has written, set to tune, sung and composed 396 Tamil and 9 English Christian songs over the past five decades which are melodious, divine inspired and is being sung in all the Tamil Christian churches around the world.

She was an artist of His Master's Voice (HMV) a prominent recording company. From then on, she served the Lord full-time as an evangelist and Gospel singer. A stickler for rules of syntax and metre in lyrics, her songs were appreciated for the depth of meaning and quality of music. HMV took full charge of production and distribution. The renowned Audio production company is prepared and published her songs continuously. For years, the All India Radio (AIR) is broadcasted her songs.

The melody queen Hema John says that she Sarah's lyrics have touched the lives of thousands of people and taken them closer to God. “There's divine anointing in her singing”, is how John puts it. The book, ‘Lily among Thorns' in Tamil has been released. It details the life and music of Sarah Navaroji and is written by Dr R. Samuel, a former merchant navy officer and engineer, who now serves in the Zion Full Gospel Prayer Fellowship Church.

She was conferred a doctorate by an International University in Rhode Island. Many of her compositions have been translated into Hindi, Telugu and Malayalam and she has travelled to United States, United Kingdom and European countries to sing and to take ‘God's Word' to eager audiences.

At the age of 76, she died on July 22, 2014 at Chennai, Tamilnadu, India and his mortal buried at Kilpauk Christian Cemetery, Chennai. She remained a spinster until her death.
Missionary Biography