June 19, 2011
Amy Wilson Carmichael (1867 –1951) a Protestant Christian missionary in India was founded Dohnavur Fellowship, a society devoted to saving neglected and ill-treated children. She was born in the small village of Millisle, County Down, Northern Ireland to David and Catherine Carmichael. Her parents were devout Presbyterians and she was the eldest of seven siblings who opened an orphanage and founded a mission in Dohnavur. She was the founder of the Welcome Evangelical Church in Belfast and she served in India for 55 years without furlough and wrote many books about the missionary work there. 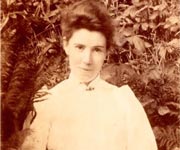 Amy Wilson Carmichael was born on December 16, 1867 in the small village of Millisle, County Down, Ireland to David and Catherine Carmichael. Her parents were devout Presbyterians and she was the eldest of seven siblings. At the age of twelve, she was sent to a Wesleyan Methodist boarding school in Yorkshire, England. There, at the age of fifteen, during a children's service, she heard a song "Jesus loves me this I know, for the Bible tells me so". In the quiet moments following the song, Amy Carmichael realized that in spite of her mother's teaching that Jesus loved her, she had never invited him into her life.

In 1884, Amy Carmichael’s father died when she was eighteen years old. After her father's death, she was adopted and tutored by Robert Wilson, cofounder of the Keswick Convention. One story of Carmichael's early life tells that as a child, she wished that she had blue eyes rather than brown. She often prayed that Jesus would change her eye colour and was disappointed when it never happened. She loved to pinch her brother's cheeks to make the prettiest colour blue in his eyes. But she always repented afterwards for hurting her brother. As an adult, she realized that, because people from India have brown eyes, she would have had a much more difficult time gaining their acceptance if her eyes had been blue.

She was the founder of the Welcome Evangelical Church in Belfast. The Welcome’s story begins with Carmichael in the mid-1880s starting a Sunday morning class for the ‘Shawlies’, i.e. the mill girls who wore shawls instead of hats, in the church hall of Rosemary Street Presbyterian which proved to be very successful. Her work among the shawlies grew and grew until they needed a hall to seat 500 people. At this time Amy saw an advertisement in The Christian, by which an iron hall could be erected for £500 that would seat 500 people. A donation of £500 from Miss Kate Mitchell and a donation of a plot of land from one of the mill owners saw the erection of the first "Welcome Hall" on the corner of Cambrai Street and Heather Street in 1887.

In 1893, Amy Carmichael travelled to Japan as a first Keswick Missionary with the Church Missionary Society for seventeen months. Then moved to Sri Lanka after a brief period of service at Ceylon in Sri Lanka, she found her lifelong vocation in India. After spending less than two years in Japan and Ceylon, she was forced to return to England because of poor health. In England, she was commissioned by the Church of England Zenana Mission. In November 1895, she again left England to work with the Church of England Zenana Missionary Society in South India.

Traveling on evangelistic trips throughout India, she became aware that many young Indian girls were offered by their parents or guardians as temple prostitutes, touched by their plight. Much of her work was with young female lives; some of them were saved from forced prostitution. She founded an organization was known as the Dohnavur Fellowship at Dohnavur in Tamil Nadu, India. Under her loving guidance, the fellowship became a sanctuary for more than one thousand children who would otherwise have faced a bleak future. In 1926 she established the Dohnavur Fellowship, a home and school for rescued children. Here the Indian children were educated and trained to serve God as Christian nurses, teachers, and evangelists...


In an effort to respect Indian culture, members of the organization wore Indian dress and the children were given Indian names. She herself dressed in Indian clothes, dyed her skin with black coffee, and often travelled long distances on India's hot, dusty roads to save just one child from suffering. While serving in India, Amy received a letter from a young lady who was considering life as a missionary. She asked Amy, "What is missionary life like?" Amy Carmichael wrote back saying simply, “Missionary life is simple chance to die”.

On October 24, 1931, she visited a Dohnavur dispensary and was concerned about the Fellowship's financial support. Seeking guidance regarding money, she fell silent for a long time and then prayed: “Do anything, Lord that will fit me to serve there and to help my beloveds”. Later that same day she was driven to a house she had rented for another dispensary. There in the darkness she fell into a newly dug pit, breaking her leg, dislocating her ankle and twisting her spine. As a result of her fell, she was bedridden the last twenty years of her life until her death. Yet from her bed, she remained in charge of Dohnavur and also wrote prose and poetry through which the work of Dohnavur became known around the world.


Amy died on January 18, 1951 at Dohnavur in Tamil Nadu, India, at the age of eighty three. She asked that no stone be put over her grave; instead, the children she had cared for put a bird bath over it with the single inscription "Amma", which means mother in Tamil. Amy Carmichael opened an orphanage and founded a mission in Dohnavur. Her biography quotes her as saying: "One can give without loving, but one cannot love without giving."