Maharasan Vedamanickam, the pioneer Protestant Christian in Travancore, was born in Mylaudy, Kanyakumari district, Tamil Nadu. No evidence found for his father and mother besides the exact birth date received yet and caste was also unknown. His ancestors were doing cultivations at paddy fields in Tanjavore. The family later moved to Vallanadu, East Palayamkottai in Tirunelveli. They lived four generations in Tirunelveli and left from Tirunelveli to Mylaudi, where Maharasan Vedamanikam was born. Maharasan's family were devoting Shivites Hindu and Maharasan was brought up in the orthodox practice of Hinduism. He was grown as an honorable devotee and visited several Hindu temples. He learned his basic education successfully with in the village. 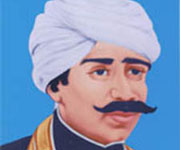 Maharasan was a true disciple of Elankamanian, the Hindu orthodox GOD. Till the age of 27, he didn't go very long anywhere from Mylaudy but he obeyed his father and mother and working in the paddy fields along with his parents.He married a good natured Hindu Women Sathiayee and loved her. Maharasan along with his mother and other family members annually used to go to Valliyur to worship the family God Elankamanyan. Tiruchendur, where the big Subramonian temple situated, he also several times had gone and worshipped Subramonian deeply in his heart. But he found inconvenient in his heart and need to be set a right peace to restore a way of peaceful life. He was finding a Peace of life. He made lot of readings, visited several local temples, got lot of advises from wise old men but didn't get fulfilled with true peace. During this dilemma, he was told, there was a temple named "Chidambaram Nadarasar Kovil" located in Chidambarm. He decided to go Chidamparam for a dharsan.

He had planned Pilgrimage to Chidamparam. He had collected sufficient money and went to Chidmbaram along with his brother's son Masillamani. Their families knew that they were both not to come back surely. They walked a great distance by road in person and reached Chidambaram. Chidambarm hadn't given anything to them because they were disappointed very much. People roughly behaved inside the temple and untidiness everywhere. He was so tired because of the journey; he took a short sleep near the wall inside the temple.

While he was sleeping he had a Mysterious dream. In the dream, a man wearing a pure white coloured dress, beat him with a stick and said don't stay here. Get away from here; you're not permitted to stay here. This is not a holy place. You just to go to Tanjavur and you will find a true GOD. The dream shocked Vedamanickam and suddenly he awakened. Then they went to Tanjavur, where Vedamanickam's relatives resided. They reached Tanjavur on Saturday night.

The next day, Sunday, his relations went to church for a worship. They took Vedamanickam to the church along with them. But Vedamanickam and his nephew not entered into the church, on account of they still worn a brown coloured Hindu swamy dress. The church was led by Rev.J.C.Kohlhoff . During the meeting, Rev. Kohlhoff noticed that there was two men watched the church from outside and listened deeply what's going on there. Rev. Kohlhoff recognized they were eager to learn the true word of GOD.

Rev.Kohlhoff Preached "Come to JESUS, Come to JESUS, He is the only begotten son, He is the only savior of world, He is the true GOD. If you come under JESUS, you will find the peace forever". Those curious words touched their heart very deeply and they accepted JESUS as a savior at once. After the meeting was over, they met Rev. Kohlhoff to what they wanted to do. Rev. Kohlhoff guided them to stay there for a week to get a baptism and given it one week later. He Received JESUS.

Vedamanikcam rejoiced in his heart and asked to Rev. Kohlhoff "I got the true peace in my mind but there were lot of people around in my hometown. How can I give the true peace for them?" Rev.Kohlhoff said to Vedamanickam there was a man called Rev. Dr. John, who led the Taramgampadi mission over 40 years. Maharasan Vedamanickam met Rev. Dr. John offering a missionary for Mylaudy to preach the gospel. But for the bad luck there was no one available to go there. Then he returned to Tanjavur, met Rev. Kohlhoff and got lot of advices from him and returned to the hometown.

Maharasan and his nephew were reaching the hometown; there a death ceremony was going on for Maharasam Vedamanickam and his nephew Masillamani. Because they took long time to get back the hometown. When they arrived at Mylaudy, the people of Mylaudy rejoiced for their appearance. He explained everything in front of them and louder "JESUS is the true GOD" and started preaching gospels on locals.

Two years gone, he met lot of troubles from the local Hindu people and puzzled himself how to solve the situation and decided to go back to Tanjavur to meet Rev. Kohlhoff for guidance. He went to Tanjavur and met Rev. Kohlhoff. When Vedamanickam reached Tanjavore, Rev.Kohlhoff told to meet Rev.Ringultaube at Tharamkampadi, where Rev.Ringeltaube learning Tamil. Vedamanickam meet Rev.Ringeltaube at Taramgampadi and told what the purpose of his journey. Rev.Ringeltaube appreciated his willness to serve the passion on his people. Then he returned to Tanjavur from Tarangampadi, stayed few days with Rev. Kohlkaff and returned to his hometown. Again he did alone 2 years ministry. Rev.Ringeltaube finished his business at Taramgampadi, reached Palayamkottai mission and frequently visited Mylaudy. There wasn't a situation Rev.Ringeltaube to stay at Mylaudy permanently.

The first church was built

Rev.Ringeltaube would have come to stay at Mylaudy but his visa hadn't provided his hands to stay permanently. For getting a permit, he went to Cochi to meet Col. Macaulay, but King's consent didn't fit for their requests, so Rev.Ringeltaube travelled to Palayamkottai mission and stayed there. During the course of time, there was a war between local King's troop and English troop. Finally the English troop had overcome and now Col. Macaulay had some power in his hand. The situation was fit for the Mylaudy people to build a church and Rev.Ringeltaube permanent stayed at Mylaudy.

During the period of time, there was a famine in the Travancore especially in Mylaudy surroundings and all the people went into the deep trouble. Rev.Ringeltaube and Maharasan Vedamanickam didn't handle the situation successfully because of lack of fund. Anyway they managed the situation but Vedamanickam went to Tanjavore to get a financial help from Rev. Kohlkaff. Vedamanickam financially helped by Rev.Kohlkaff for the Mylaudy people and returned to Mylaudy.

Maharasan Vedamanickam looked after Rev.Ringeltaube, wisely and successfully. He managed himself for 2 years before Rev.Mead came. He visited lot of villages, preached gospel, held prayer meetings, regularized the BIBLE readings, arranged church meetings and managed the mission without a help of foreign missionary. The managerial capacity of Maharasan Vedamanickam's truly appreciable. The foreign funds didn't get during his administration. The financial conditions had stricken the mission very bad. Bishop Middleton, the first bishop for India from abroad, had visited Mylaudy mission and Vedamanikcam, praised him and encouraged him.

The London Missionary society had arranged missionary Rev. Mead to fulfill the Rev.Ringeltaube place as a foreign missionary persuading the mission work. Rev. Mead belongs to England, a sensible person; the father of Protestant Mission in Travancore arrived at Colachel. Vedamanickam and his colleague's whole heartedly received him. Vedamanickam had handed over charge of the mission to Rev.Mead in December 1817 and received the same respect and attention as he got earlier. On account of his old age and in consideration of the special services he had rendered to the mission, Rev. Mead allowed him to continue his services at Mylaudy. Rev.Mead transferred the headquarters to Nagercoil in 1818 from Mylaudy, but Vedamanickam continued his work in Mylaudy and worked there until his death.