Father Charles Spinola or Blessed Charles Spinola, is the Roman Catholic Missionary and Martyr, born in Genoa, in Northan Italy, 1564. He was an Italian nobility family. He was educated by his uncle Cardinal Filippo in Jesuit School at Nola, Compania, Italy. Then he moved to Noviatiate in 1584 and joined the Jesuits in Nola and was ordained in 1594. In 1596, he received a letter appointing him to the missionary in Japan. His journey was marked by shipwrecks and delays, which included captivity in England and he reached his destination, Nagasaki in Japan in 1602, six years later. He worked at ministering to the growing Christian community in Japan for twelve years. In Miyako, he taught mathematics and astronomy at Jesuit College until 1614.


In 1614, there was a riot to persecute Christians; all foreign missionaries were banished from Japan. So Charles Spinola went into hiding, eluding capture for four years. He captured on 13th December 1618 and imprisoned. He was abused for his faith and his works. He took three attempts to escape from there to reach the Island. After enduring four more years of captivity, he was slowly burned at the stake to death on 10th September 1622 at Nagasaki, Japan. Spinola was venerated on 26th February 1866 by Pope Pius IX and blessed on 7th May 1867 by Pope Pius IX along with 30 other Jesuits, over half of whom were Japanese. He spent four years living in a cage, bribing the guards with his food to obtain the necessities to conduct Mass.Martyred. 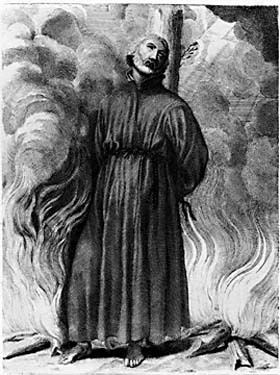 His readings: - “Father, how sweet and delightful is it to suffer for Jesus Christ! I have learned this better by experience than I am able to express, especially since we are in these dungeons where we fast continually. The strength of my body fails me, but my joy increases as I see death draw nearer. O what happiness for me, if next Easter I shall sing the heavenly Alleluia in the company of the blessed!” Blessed Charles.