John Smith Griffin, an American missionary in Oregon Country, was born on 23rd November, 1807 at Castleton, Vermont in United States of America, to parents who emigrated from England. In New England and Ohio in USA, he received an education in both the schools and seminaries and was finished in Oberlin. Then he was ordained as a Pastor in the Congregational Church and sent to Litchfield County, Connecticut in United States of America. He was sent him as an unaffiliated missionary to Oregon Country to convert Native Americans by the Congregational Church. On 10th April, 1839, he married Desire C.Smith in Saint Louis, Missouri of USA, who taught school to the native children.
John Smith Griffin arrived in Oregon in the State of United States of America in 1839 and stayed at the Whitman Mission, he moved to the Hudson's Bay Company's Fort, Vancouver on the Columbia River. Until 1841, he stayed at Vancouver; he tutored children of the fort and served as the post's chaplain. In 1841, he settled on the Tualatin Plains in what is now Washington County, Oregon where he would establish a church on 26th June, 1842. He had planned on setting up a mission on the east side of the Cascade Mountains, but did not receive funds from the Missionary Board and instead set up a farm in the Tualatin Valley. From the time, he settled there until 1848, he kept a journal of the arrivals of settlers on the Tualatin Plains. He continued as a Pastor of the Congregation until the parishioners removed him in 1845 because of his rigid beliefs, replacing him with Harvey L.Clark. While living on the plains, Griffin set up his own personal jail in order to detain Native Americans who would steal from him. 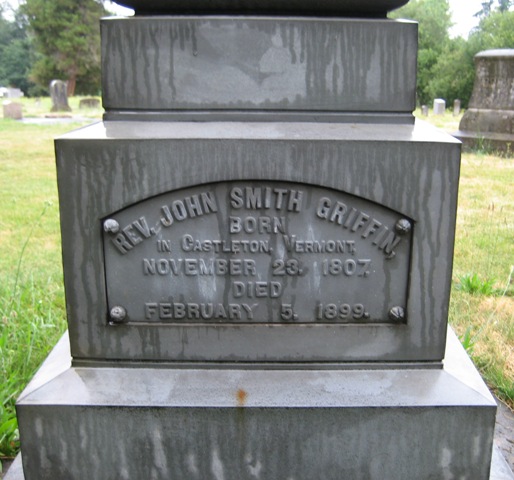 In 1843, John Smith Griffin attended the meetings at Champoeg on the Willamette River that created the Provisional Government of Oregon. In 1848, he took possession of the Oregon Mission Press. In 1851, he invested in the Portland and Valley Plank Road Company, which began building a plank road from Portland to the Tualatin Valley. His wife, Desire C.Smith died in 1884. Then he married Lina Harvey Kenyon in Three Oaks, Michigan. John Smith Griffin died on 5th February, 1899 and is buried at Hillsboro Pioneer Cemetery in Hillsboro, Oregon.
Missionary Biography