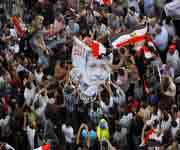 The head of the Coptic Orthodox Church in the UK has spoken of his hope for positive reform in Egypt after the election of Mohammed Morsi as president.

The Muslim Brotherhood’s candidate is Egypt’s first democratically elected president, coming to power 16 months after the fall of Hosni Mubarak’s regime. In his victory speech, Mr Morsi promised to be a “president for all Egyptians”.

“I call on you, great people of Egypt … to strengthen our national unity,” he said, adding that national unity was “the only way out of these difficult times”. There were scenes of celebration in Cairo’s Tahrir Square after it was announced that Mr Morsi had seen off his rival, Ahmed Shafiq, a former prime minister under Mubarak. Mr Morsi’s election victory has been welcomed by world leaders, including US President Barack Obama.

The General Bishop of the UK Coptic Orthodox Church, Bishop Angaelos, spoke of his desire to see Egypt continue towards democracy. “We pray that God grant him wisdom to govern Egypt and her people, and hope this heralds a smooth transition to continuing democracy, leading to positive reform and the building of a new ethos that is cohesive, instilling a sense of citizenship, ownership and responsibility into every Egyptian,” he said in a statement.

“This is the time for Egypt to become a nation that does not focus on a person's religious or political stance, but more on his or her contribution and accountability to a single nation state and equality before the law".

“We call for an Egypt for all, one that takes into consideration the value and rights of every citizen, and pray for the new president as he takes on this responsibility".

“We hope that throughout his service, it is the good of the people of Egypt that will always be core to the decisions he makes at this formative stage and throughout his period in office.”

There are some concerns that the powerful military establishment may hinder further democratic reforms. Aidan Clay, of the advocacy group International Christian Concern, told BosNewsLife: "A military takeover of the democratic process that Egyptians fought so hard to achieve could mean civil war. "A similar situation occurred in Algeria when the army staged a coup just before elections to stop the Islamic Salvation Front from gaining victory in 1991. The result - 150,000 to 200,000 killed in a decade long civil war.