At least 15 die in grenade attacks on Kenya churches 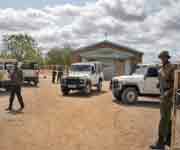 At least 15 people were killed in a grenade attack on two churches in Northern Kenya on Sunday. Masked gunmen attacked the African Inland Church in Garissa and a Roman Catholic Church in the town situated near the border with Somalia. They then reportedly opened fire on worshippers as they attempted to flee the buildings.
Witnesses have reported 15 people dead and around 50 wounded. The fatalities included two policemen who were posted to guard the door at the AIC church. National police spokesman, Eric Kiraithe told Reuters news agency that the attack was the worst since Kenyan troops entered Somalia last October following a series of kidnappings and raids in the border region. “It is the worst in terms of the numbers killed, the manner of execution, the anger behind it and the anguish it has aroused as well as the national impact it has had,” he said.

No group has come forward to claim responsibility for the attacks although suspicion has fallen on al Shabaab sympathisers.

Kenyan Vice-President Kalonzo Musyoka condemned the attacks. He said: "Places of worship including churches, temples and mosques among others should be respected, it is unfortunate that two police officers assigned at the church were shot and killed."

US President Barack Obama’s administration said in a statement that the perpetrators “must be brought to justice for these heinous acts”. “At a time of transition, peace and stability are essential to Kenya’s progress,” the statement said. “We support those who recognise Kenya’s ethnic and religious diversity as one of the country’s greatest strengths.” CHRISTIAN TODAY