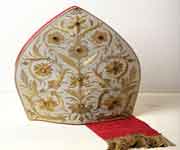 Church of England bishops are being asked to withdraw a controversial amendment to legislation on women bishops. The petition by the Women and the Church (WATCH) group wants the House of Bishops to withdraw Clause 5(1)(c) from the draft Measure and allow the General Synod to vote on the original draft legislation that was approved by 42 out of the 44 Church of England dioceses. Clause 5(1)(c) states that a male bishop or priest selected to provide alternative oversight to orthodox parishes must share their theological convictions in relation to the consecration or ordination of women.

Women and the Church

The amendment would "entrench permanent division in the Church over the acceptance of women as priests and bishops, and feed a deeply damaging ambivalence towards women as made in the image of God". The petition is calling for the withdrawal of Clause 5(1)(c)and has been signed by more than 4,000 people.


The Rev Rachel Weir, chair of WATCH, said: "It is very moving to read the responses of ordinary churchgoers to the House of Bishops' intervention. "WATCH is praying that the House of Bishops will have the humility to recognise that it has got this wrong and to remove Clause 5(1)(c) so that General Synod can vote on the draft legislation that was overwhelmingly approved by the dioceses."


Senior women clergy have written to Synod members saying that they are now unable to support the Measure as the amendment to Clause 5 "undermines women so profoundly". Signatories of the letter include the Rev Rose Hudson-Wilkin, chaplain to the Speaker of the House of Commons, the Very Rev Catherine Ogle, Dean of Birmingham, and the Rev Lucy Winkett, Rector of St James's Piccadilly in London. The Gloucester Synod passed an emergency motion calling for the final vote on women bishops to be deferred until November to allow more time for the bishops to reconsider the amendment. The amended legislation has also failed to gain the support of orthodox Anglicans. The Reform group within the Church of England is asking its members in Synod to vote down the legislation.


Reform chairman, the Rev Rod Thomas, said he was not persuaded that there was a "secure future" in the Church of England for Anglicans who cannot in conscience accept women bishops. "The furore created by some in response to these small amendments reveals most clearly the reason why those who hold to our biblical position need legislative clarity, not just a code of practice if we are to continue to encourage young people to come forward for ordination," he said.


"There is clearly a desire on the part of some to see any provision for us as strictly temporary, despite the fact that we're simply seeking to follow the Bible's teaching about how God wants his Church to be organised. "They hope we'll just leave. However, we believe the majority of Anglicans want to honour the promises made to us over the last two decades to preserve a place for us in the Church of England. "As it stands, the draft Measure doesn't do this - and we'll be asking General Synod to withhold approval of the draft Measure so that some proper compromises can be agreed."