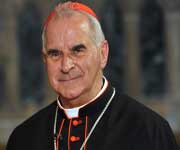 The head of the Catholic Church in Scotland has called upon the Scottish Government to hold a referendum on same-sex marriage. Cardinal Keith O'Brien, The head of the Catholic Church in Scotland said it was a matter of "intense public interest" after a Government Consultation on legalising gay marriage attracted 80,000 responses. When the consultation was launched last year, the Scottish Government said that it "tends towards the view" that same-sex marriage should be introduced. Assurances have been given that faith groups will not be compelled to solemnise the ceremonies. Leaders in the Catholic Church North and South of the border have been vocal in their condemnation of the proposals.

Cardinal Keith O'Brien, The Head of Catholic Church in Scotland

Cardinal Keith Michael Patrick O'Brien, the Head of Catholic Church in Scotland and the Archbishop of St Andrews and Edinburgh of the Roman Catholic Church said: "The Scottish Government's consultation on redefining marriage had three times more respondents than the consultation on the constitution, demonstrating clearly that far more people are concerned about fundamental matters of morality at the present time.


"Clearly, if it is sensible to hold a referendum on independence, it is crucial that we have one on marriage. It is the only way the country can move forward on this issue. Let all those who have a view on this subject place their trust in the Scottish people and let Scotland decide." The Catholic Church is raising £100,000 to support the Scotland For Marriage campaign in support of traditional marriage. Cardinal O'Brien said: "Marriage is under threat and politicians need to know the Catholic Church will bear any burden and meet any cost in its defence."